The UK’s Guardian newspaper is currently holding their Classroom Innovation awards, a competition in which local schools submit a three minute video to show how they are creatively using technology in the classroom.  Dave White from the Design & Technology Department at Clevedon School submitted a video showing how the school uses our Bits From Bytes RapMan and BFB3000 printers in their curriculum. 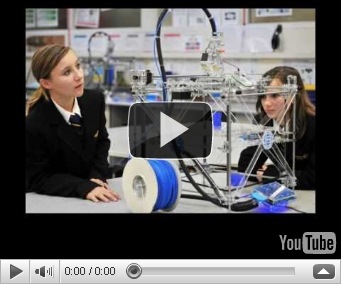 On January 11, 2011, the results of the public vote will be announced, and the field will be narrowed down to six finalists (the three most popular entries from each category).  From January 12-15, those six finalists' videos will be showcased on the ASUS display (K29) during the educational technology show BETT 2011, in Olympia, London.  Visitors to the ASUS stand will be asked to select a their favorite for each category from the entries on display, and the winners will be announced on January 15.  In the end, there will only be two prizes:  One for primary schools and one for secondary schools, each receiving £7,500 worth of ASUS computer equipment for their schools!

You can help Clevedon School win by simply emailing the Guardian with "Classroom Innovation awards" in the subject line.  In your email, make sure you clearly state you’re voting for Clevedon School’s 3D Printing video in the secondary school category.  Voting is now open until 5pm on January 7.