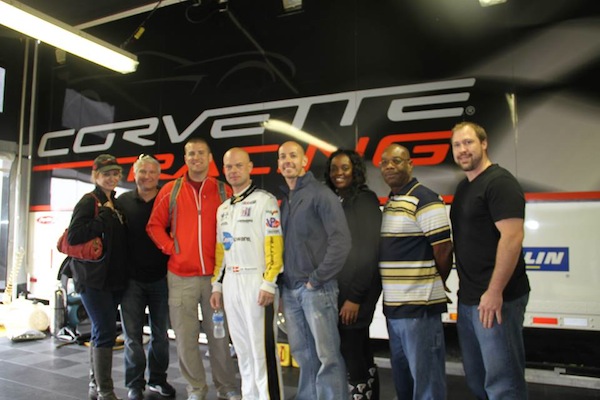 The conclusion to the American Le Mans Series (ALMS) auto-racing season was held on October 20, 2013, and the 3D Systems-sponsored Pratt & Miller Corvette racing team was there and poised to win the 2013 GT series championship. The race, which was held at Road Atlanta in Braselton, Ga., is one thousand miles long and takes place on a 2.54 mile circuit containing twelve turns and long straightaways, giving the super-charged vehicles an opportunity to accelerate to well over 100 mph. Drivers Antonio Garcia, Jan Magnussen, and Jordan Taylor needed to finish higher than seventh in their 750hp, small block V-8 in order to win the season title. (Image above: The 3D Systems crew with driver Jan Magnussen.)

Several 3D Systems employees were in attendance, and over the course of the 10-hour event, they were able to share the full race experience. Following a brief safety talk and a quick change into fire suits, all attendees experienced the hot pits first hand during a tire change. The yellow and black Corvette came to a screeching halt as the crew quickly and efficiently changed all four tires and refueled the Chevrolet.  Antonio Garcia smoked the new set of Michelin tires as he headed back to the track and regained speed.

The team battled mechanical difficulties, unpredictable weather, and a Dodge Viper on its way to a 6th place finish, which was enough to secure the 2013 Corvette Racing team championship.