Every year, thousands of people converge on Austin, Texas, to spend a week or more attending panels on the future of tech and music, visiting party after party hosted by any number of brands trying to garner attention in the vast sea of hype, and standing in long lines for sometimes 2-3 hours to hear industry heroes speak or see the new band that everyone is talking about.

In the early days of the SXSW Interactive, Twitter dominated the landscape. Today, SXSW is inundated with scores of social platforms, agencies hawking their ability to optimize or find the best possible SEO for your site, and corporate brands like Chevy or American Airlines that want you to remember how cool they really are despite their size and share of the market space. 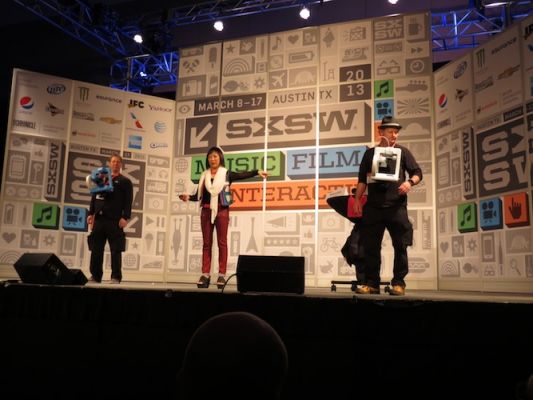 This year, however, was markedly different from years past, as 3D printing emerged as a dominant presence at the show. 3D printing's sudden popularity was much to the chagrin of those who have been in the industry for years and find it laughable that people are touting it as a new technology. And how can you blame them? The majority of the panels on 3D printing were held over 2 decades after the technology was founded by Chuck Hull of 3D Systems, and yet so many at SXSW were getting their first taste of 3D's future.

The 3D printing conversation was dominated primarily by two companies: Makerbot and 3D Systems. But in many ways, it was the Cube by 3D Systems that stole the show. On the back of Saturday's strong keynote presentation by Ping Fu, 3D System's Chief Strategy Officer, the Cube quickly became a recognizable figure at the show and a popular attendee, if you will, at the party and culture scene of SXSW. 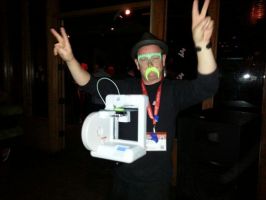 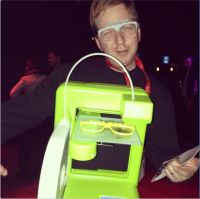 How do you make sure 3D printers are on display at all the important parties? Simple. You build a harness, put a battery pack on it, and have team members walk around wearing fully functional 3D printers that they can show directly to the audience. Instead of seeing it on a slide show, or watching another presentation showing videos of what might be, the Cube was right there in front of them, creating objects in real time. During Ping's talk, two Cubes were walked up the aisle as she spoke about the future of consumerism and 3D printing, and they joined her on stage while she discussed the possibilities as we move forward. You would have thought that Justin Bieber had jumped on stage with the number of smart phones being held in the air as people scrambled to the front to grab a photo.

During the rest of the week, the Cube walked up 6th Street (a busy thoroughfare in the heart of SXSW) and showed up at places like the Crowdtap party, where their only rival in popularity was a free candied bacon ice cream sandwich. It's hard to compete with bacon. 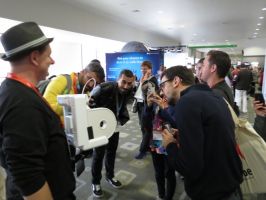 On Monday, Avi Reichental of 3D Systems, Alice Taylor (MakieLab) and Scott Summit (also of 3D Systems) sat on a panel hosted by Rich Brown of CNET to talk about the Future of 3D Printing. It was yet another opportunity to not only hear from industry leaders but also to see how the applications of 3D printing are multiplying. Take Alice Taylor's new business venture; Alice came from the video gaming world to making custom 3D-printed dolls. Many inventors, entrepreneurs and consumers are finding ways to utilize 3D printing on a daily basis and are amazed at how easy it was for them to step right into it.

Why is this important? In my humble opinion, and from the multiple conversations I had with people ranging from social media contacts to angel investors to UX designers, this was the first time 3D printing went beyond science fiction. They weren't seeing a device on stage with a presenter, but rather they experienced it in the wild, with everyone, interacting in real time. Suddenly, the process felt more tangible to them, and the conversation shifted from"What if?" to"I can't wait to get a Cube and be able to create and print my own designs."