3D is seemingly popping up everywhere: 3D printing, 3D movies. But 3D has been successfully used in visual effects (vFX) for entertainment for about 20 years. In that time, has just been getting better and better at creating stunningly realistic worlds for your TV and movie screens. 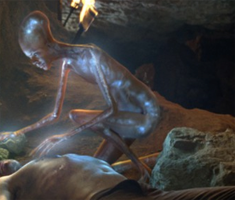 The main challenge with 3D is often simply getting the data to start with. Do you start modeling from scratch? Do you buy a model and adjust it? Do you scan it in? It often makes sense that when you need something"real" you might as well scan from the real world and use that. Hey, we have software for that! There are times when creating the 3D from scratch also makes sense. Hey we have software for that too!

The story below is about the entire vFX process used by experts in the UK to create the BBC's Merlin series. Stunningly beautiful, the series features a young wizard in the times of the Round Table and Camelot. The team used probably the entire realm of vFX technologies to put this together, and Geomagic software played a small but key role in delivering real world scenes and locations into 3D for the work.

The story in fxGuide is very lengthy and detailed, but a fascinating look inside what it takes to do a TV series like this. The scanning aspect was handled by Duncan Lees at 4DMax, using his trusty Leica C10 scanner to capture real world data of 2000-year-old lead mines and converting it to usable 3D data using Geomagic Studio.