The Future of 3D...just look in your own backyard.

Traveling south on US Route 1 near my home in North Carloina I pass by Lake Jordan and experience the South in a way that very few have a chance to in today's fast-paced jet-fueled digitally networked life. Some might say rural, certainly not backwoods, but from any perspective it is a beautiful stretch of the original auto-route (c.1909) between Washington DC and Atlanta. Endless stretches of mown grass and tall southern pines. It's just one reason I moved here from the cement sprawl of Los Angeles four years ago. It turned out to be a much needed and cathartic detour from my daily chores in the office.

I had a place to be and a time to be there...I wouldn't have driven so far past my favorite fishing spot and a dozen golf courses if I didn't. It was made clear to me that this trip would be worth my time. The drive was nice...

You wouldnt' expect to find an incubator of high tech so far from Research Triangle Park...and there, as I understood it, were some kids that wanted to gain a better understanding of our Fuse technology and the finer points of polymesh registration and healing. Snore...that's baby stuff, intuitive, self-exlanatory, what could I possibly impart. Oh yeah, their instructor (Jeff Epps) had flown back from the White House the night before after receiving a Champions of Change Award and these kids are supposed to be doing something interesting. Ok ok, I'm interested...keep driving. 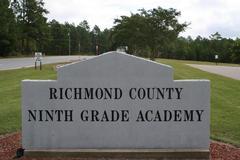 After and hour and a half of verdant roadsides of grass, trees, deer, wild turkeys, foxes, and eagles...I pulled off US Route 1 near what I consider one of the largest railroad sorting yards I have even seen. Nearly halfway between our Development Center at RTP and our Global HQ in Rock Hill SC lies the Richmond County 9th Grade Academy. Don't let the name fool you, this is a public school in a public school district with a budget to match.

Meeting Jeff I was intantly set aback by his charisma and infectious energy. Every fiber of Jeff is focused on his mission:

"He sees a future in which students finish school with employable skills, such as engineering, alongside the intellectual tools to take them further, like critical thinking, applying knowledge, and adapting to new challenges"

Tireless, selfless, making a difference in a place that wouldn't be given a second glance from 25K feet, let alone receieve an invitation from the President."We are here to push, and to test, and to fail, and try again and again, (so the kids) truly understand and apply 3D technology". He says,"It's easy when you have kids like this," and I don't doubt it, the kids are the beneficiaries of his devotion and he of their success. I can see why 3D Systems and the White House are keeping close tabs on Jeff's efforts. 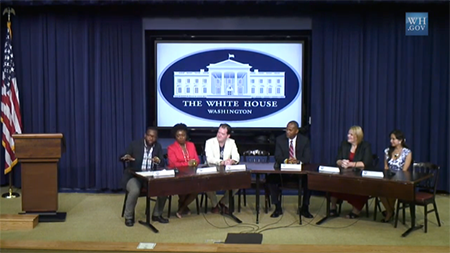 Mr. Epps is not alone...Chad Osbourne is the curricular engine and technical backbone of the program (I wish I had taken your pic on my iPhone, sorry about the LinkedIn thumbnail Chad)

Chad keeps the summer camp participants buried in every ounce of technology Jeff and he can muster. They both service a small group of students that would rather spend their summer designing, developing, animating, rendering, and tackling technolgies that leave some seasoned engineers tearing their hair out. 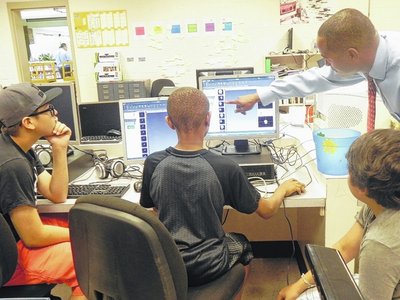 After the usual introductions, tour of the facility, and an unbelievable briefing on what they've been up to, it was my turn to present and I simply didn't know where to start. They were pre and early teen techno-geeks and seemed to be way ahead of the curve. So I asked"what are you having problems with?" "How can I help?" I figured they would want to see how I close holes, remove noise from the data, blah blah....but what I got back was,"we're having problems registering scans, for instance, the canoe." These kids weren't scanning their head (well they were, had, did, and had them in 3D Studio Max already), they wanted to scan a car, a canoe, and a car's exhaust sytem with a Kinect and 3 year old version of our code. These guys didn't need help with using the software, they needed start-up capital...9th graders!

The kids understood that this is not a game (oh yeah, they were importing their digital assets into the Unity 3D game engine and rigging them for game play...and coding!...9th graders...and younger!) But there was something else in the room, it was in their demeanor and focus. They had given themselves over to the idea that they can do it if they tried, and they would succeed if they did not give up, and failure and hard work were part of the equation, and it IS. Above all they were sad that it was the last day of the camp and every hand went up when asked if they would be willing to spend four hours of every Saturday over the school year to continue thier work. Jeff is right, it's easy to be a motor of character with kids like these.

I was startled at the advanced tech for such a young group. However, driving home I kept thinking of the diligence, the fearless exploratation and the scientific principles and work ethic instilled in the youngsters by Jeff and Chad. Never give up and do not be discouraged by hard work and failed attempts.

I'll leave you with a thought...summer school at Richmond 9th Grade Academy is far from the rocketry class and math prep I took in 9th grade, heck, PC's weren't even invented when I was in 9th grade. We're old...my son is six and is already using haptics, iPhones, tablets, and designing his own web pages after basketball. But I'm tired of hearing"these kids will grow up never knowing what a rotary phone is..." and I'm sure you are too. So leaving that out...I'll say this, let's help our children leverage the technology and information now at our fingertips. Jeff and Chad are doing this today, and perhaps more importantly, they are giving these kids a bright future even if they don't go into 3D technology...the lessons learned in this program will carry them far down any professional path they choose to take.

In all I had a fantastic trip, it was good for my soul and my spirit. Congratulations Jeff and Chad on an outstanding program.