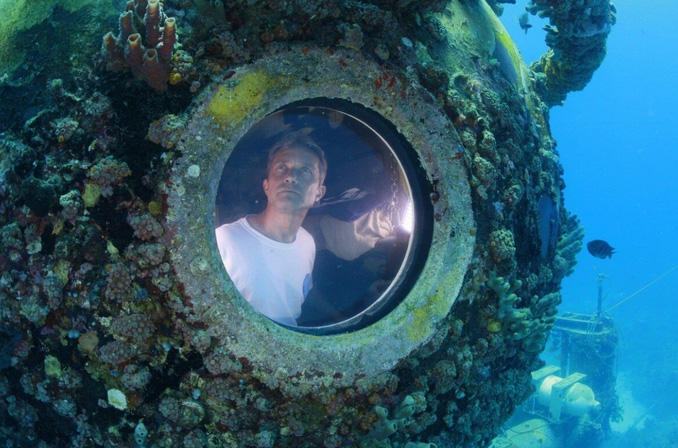 After spending a record 31 days living 63 feet below the waves of the Atlantic Ocean, Fabien Cousteau finally surfaced on July 2, 2014. During the aptly named “Mission 31,” Fabien Cousteau, grandson of renowned ocean explorer Jacques Cousteau, led a rotating team of scientists, documentarians, and activists to their temporary home, Aquarius, in a joint effort to deepen our understanding of marine life and the effects of pollution and climate change. (Image left courtesy of 360 Heros.)

Among the filming expedition was Jonathan Woods from TIME Magazine, who spent a day diving with researchers. To document every angle and facet of Aquarius and Cousteau’s research, Woods used 360 Heros scuba gear, a specially designed and 3D printed camera mount for 6 GoPro cameras. The rig generates fully spherical HD video, allowing Woods to create an interactive 360? tour of the aquatic research facility.

Mission 31 was a success in part due to its astounding duration, but more importantly because of the vast quantity of data that was collected during the expedition. The time saved from avoiding back and forth trips to the surface and having a continuous supply of oxygen allowed researchers to collect the equivalent of approximately two years’ worth of information in one month underwater.

Click here to read more about Woods’ experience and explore the research facility in 360?video.

Back to Basics – Why Additive Manufacturing? What 3D Printing Technology?

At 3D Systems, we are paving the future for 3D printing. This summer, students will have the opportunity to support our global teams at our different U.S. office locations including Berkeley, CA; San Diego, CA; Littleton, CO; Houston, TX; Rock Hill, ...
4 min
Video

In this short clip, our very own Jeph Ruppert introduces some of the unique productivity features of the DMP Flex and Factory 350 Dual. These mid-frame metal 3D printers deliver extremely dense, strong metal parts to an impressive Z-height of up to 4...
Article

The 2022 Rapid + TCT event was held at Huntington Place in Detroit, Michigan where 3D Systems joined other additive manufacturing experts to share unique advancements in the industry. This year the 3D Systems team came to the show and highlighted how...
5 min