TopCoder is a global community comprised of over 700,000 of the world’s greatest designers, developers and data scientists.  This week, the best of the best gathered in San Francisco at Pier 48 for the 2014 TopCoder Open, and over the course of four days, this talent worked through a series of challenges both collaboratively and competitively. 3D Systems was thrilled to sponsor the event along with Facebook, Google, and Sequoia Capital, among others. While there, 3D Systems hosted three events and competitions, and the energy and results were extraordinary.

Cathy Lewis, 3DS’ Chief Marketing Officer, kicked things off with an engaging talk on the event’s main stage, during which she announced the first App Ideation Challenge.  This new challenge series focuses on our newly released Touch Haptic Stylus, and the OpenHaptics SDK (Software Development Kit). The community readily took to our new tool and challenge, and we look forward to seeing what they come up with in the coming weeks. 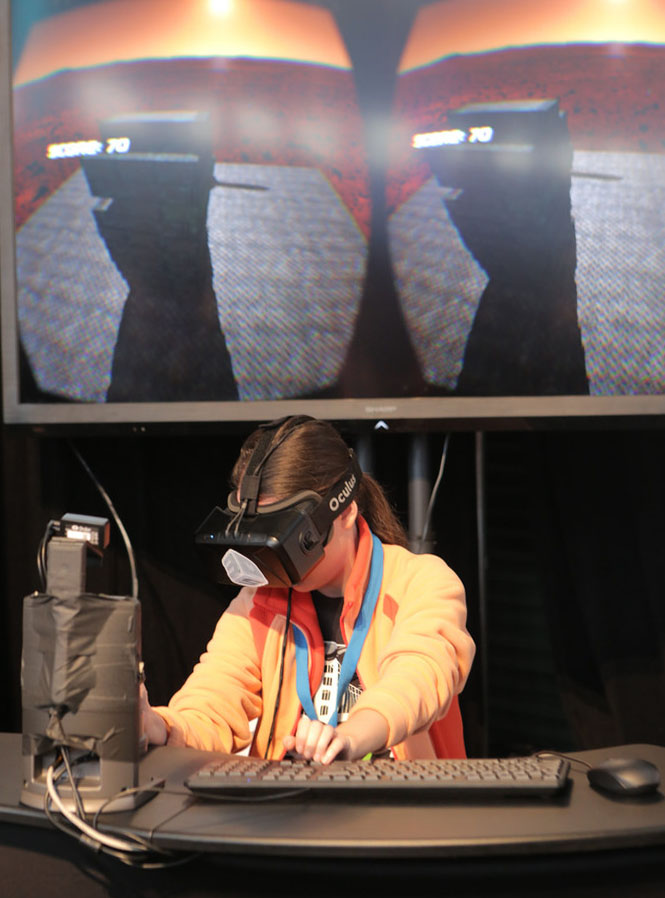 To introduce the Touch and it’s SDK we worked with the Art School of Glasgow to create a game using Oculus Rift VR Goggles, the Unity Game Engine, the Touch Haptic Stylus, and imagery from the Mars Rover. From this far-reaching combination Knock Blocks was born!  ‘But what’s Knock Blocks?’ you might be asking. Knock Blocks is the world’s first virtual reality haptic block stacking game on Mars, of course! This game allowed the community to truly understand haptic technology and inspire them to think towards what’s possible when you create applications using the sense of touch. We hosted the Knock Blocks World Championship, and over 50 people competed in a World Cup style tournament to win a CubePro and the Knock Blocks World Championship trophy.  The finals were intense and the crowd went wild for the Touch.

For our final TCO foray, 3D Systems was selected by TopCoder to be the focus of the Design Studio Challenge.  TopCoder took their 11 best UI/UX designers, and had them create a mobile application for customizing 3D printed products.  The app concept was called “Hilo,” Creation through Inspiration.  After two days of competition, the participants delivered agency-level design work that points towards the future of user experience for 3D printed creation, customization, and e-commerce.

We are so thankful to the TopCoder team for a fantstic four days brimming with innovation and look forward to taking this work forward to lead the way in the democratization of 3D printing. 3D Systems is proud to offer a unified platform of tools to achieve widespread access and ability, and the TopCoder community has the talent, vision, and skill set to change the game from a world of CAD-to-print to a world of app-to-print.