When Adrian Niles was 8 years old, he found himself captivated by Legos. On the surface this seems rather typical, but what Adrian has built in the decade since is anything but. Adrian is now 18, and has received accolade upon accolade for his achievements in design and engineering. As it turns out, when you’re a teenager building functioning and safety-enhanced “people-movers” out of your garage and local workshops, you end up turning some heads. To clarify, a “people-mover” is a self-balancing, controlled-propulsion, Segway-like vehicle that one rides while standing. Adrian has equipped his with added safety features such as rear proximity-sensors, foot steering, turn signals, and automated head- and rear-lights.

Though undeniably smart and talented, the most incredible component of Adrian’s story is his motivation and self-direction. Adrian decided to build his people-mover after he won a design competition during his sophomore year of high school. He received a $500 prize for creating a coaster that lit up when a drink was placed on it, and in Adrian’s eyes, the smartest use of this money was to reinvest it in his ideas. He had always wanted to ride a Segway, but because they were so expensive, he decided to build his own. He didn’t know how, but he didn’t see that as a hurdle.

Like any from-scratch project, Adrian’s started with research. He explored the feasibility of his idea, the materials he would need, and where to get them. He tested motors and gears, learned the necessary Arduino code, and performed environmental testing of components. Perhaps most critically of all, he set a deadline. He began his project in April of 2012, and wanted to finish before the school year was up on June 6th. If you were ever wondering how to use “ambitious” in a sentence, this scenario fits the bill.

Given Adrian’s gaps in expertise and the time constraints he faced, much of the feedback he received was skeptical. Adrian said he could get it done, but his teacher thought he needed more time. They made a bet, wagering a box of Nerds candy. 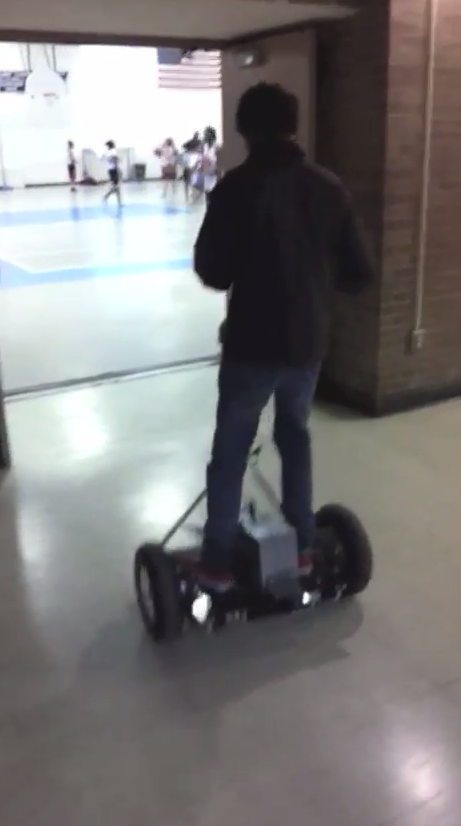 Adrian not only won the bet and succeeded in making his people-mover, but he has gotten extensive recognition for his work, including citations from the Mayor of Boston, the Governor of Massachusetts, the Massachusetts State Senate and his local City Council, along with 2 gold medals for engineering at both the local and national level.

When Adrian brought his people mover to the White House Maker Faire in 2014, he continued to attract attention for his achievements. Among those impressed were entertainer and entrepreneur will.i.am, who also serves as the Chief Creative Officer for 3D Systems. Both 3D Systems’ CEO Avi Reichental and will.i.am were blown away by Adrian’s project. Through their idea share at the National Day of Making, will.i.am invited Adrian to up his game at will.i.am’s Los Angeles studio to create his next people mover using 3D printing. Though Adrian had only minor experience with 3D printing (having printed the piece that stabilized the people mover’s accelerometer and gyroscope), he eagerly accepted the challenge and is now well on his way to creating his second design.

Adrian is a reflective young man whose presence is energized by an undercurrent of drive. While talking with Adrian, it became evident he is always thinking about what’s next, and from witnessing his potential, it is exciting to look forward with him. In the long term, he says he wants to help people make their lives better with the technology he’s learned. “My goal is to create a place where kids can come and gather motivation for their projects and ideas,” he says. Adrian is grateful for the benefits he has reaped from these kinds of initiatives, and it is inspiring to see his desire to feed the cycle of creativity in this way.