In September of 2001, first responder Patrick Hardison was gravely injured in the line of duty as a volunteer firefighter in Senatobia, Mississippi. After entering a burning home on a rescue search, the flaming roof collapsed, leaving Patrick with traumatic and disfiguring injuries across his face, head, neck and upper torso. “It was terrible,” Patrick told Nightline, having left home on what seemed a normal day, only to have his life take a severe and painful turn. He lost his eyelids, ears, lips and scalp, as well as most of his nose.

“There was nothing left of his face to tell you who he was,” a friend on the scene told ABC. Following 63-days of recovery in the hospital, Patrick returned home only to discover that his children, ages 6, 3, and 2, were terrified by his appearance. Though his wife and children adapted to his dramatically altered face, Patrick remained devastated by their reaction and those of others as he settled into his new reality.

Over the course of the next decade, Patrick underwent more than 70 surgeries with the hopes to regain his former appearance. Each cycle of surgeries added physical and mental strain with painful recoveries, minor improvements and dwindling hope for him and his family.

Just when all seemed lost, Patrick applied for a total face transplant with Dr. Eduardo D. Rodriguez, chair of the Hansjörg Wyss Department of Plastic Surgery at NYU’s Langone Medical Center. Once vetted by the hospital to ensure post-surgical compliance and awareness of surgical risks (a 50% survival rate), Patrick and Dr. Rodriguez were each committed to the procedure.

After a string of difficult months waiting for a donor match, Patrick finally got the call on August 14, 2015. Finding a donor for this operation was like finding a needle in a haystack, considering the extensive set of variables required for a match. Patrick’s donor needed not only to match in hair color, skin color and blood type, but have a similar skeletal structure as well. For a successful facial transplant, the recipient and donor must have very specific correlations in the distances between and among all facial features.

Once a donor was secured, the true challenge began. In a 26-hour surgery, Dr. Rodriguez performed the surgery, aided by a team of more than 100 physicians, nurses, technical and support staff. Apart from human support, Dr. Rodriguez had technology on his side, and was aided by 3D Systems’ Virtual Surgical Planning (VSP®) to achieve the highest possible accuracy in his cuts and grafts.

VSP® uses medical scan data to derive 3D models that can be 3D printed as anatomical structures for visualization, or adapted to create patient-specific instruments and guides.  In this case, two precise patterns of cuts were generated: one for the donor’s anatomy and one for Patrick. Transferal templates for Patrick were likewise 3D printed using a biocompatible material that can be sterilized and used in the OR. Impressive in its own right, the timeline for turnaround in Patrick’s case was very tight. In near lockstep with Patrick’s phone call for surgery, 3D Systems’ Medical Modeling team received the donor scans, and in a matter of hours, the 3D experts in Colorado planned, prepared and couriered the surgical guides into the hands of Patrick’s surgeons in New York.

Dr. Rodriguez transplanted skin, nerves and muscle over Patrick’s musculature with the hope that donor and recipient anatomies would connect. Perfect alignment was critical, as this would allow Patrick’s muscles to power donor structures. With much credit to the expertise of Dr. Rodriguez and the careful blueprint allotted by Patrick’s customized VSP® guides, the surgery was a success, giving Patrick a new face, scalp, ears, ear canals, eyelids, and select bones from the chin, cheeks and entire nose. 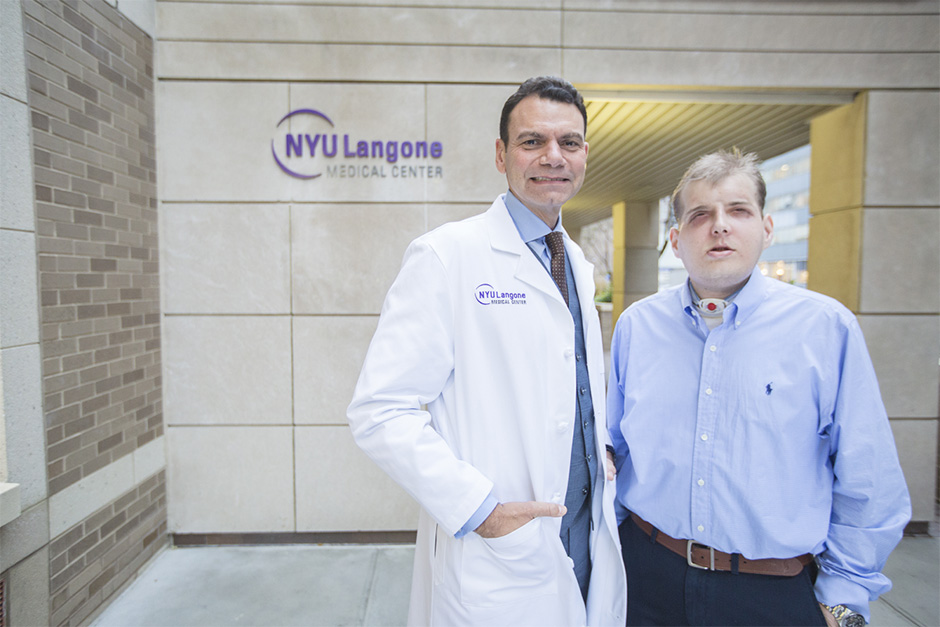 According to Dr. Rodriguez, the success of Patrick’s surgery sets it apart as an amazing learning tool. For Patrick and his family, however, his surgery represents a new lease on life.

Click here for more information on organ donation through LiveOnNY.