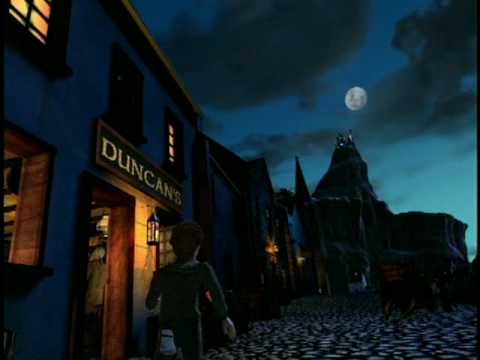 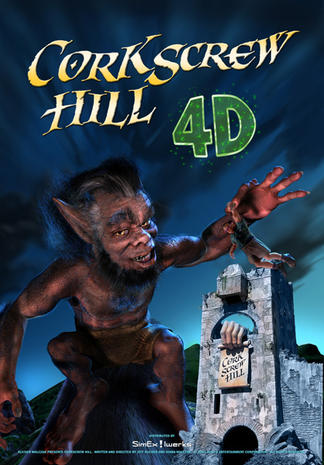 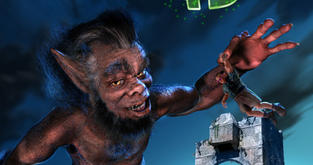 A Kleiser-Walczak Production, Corkscrew Hill was written and directed by Jeff Kleiser and Diana Walczak, who previously created the Universal theme park attraction The Amazing Adventures of Spider-Man.

With their latest ride film, Kleiser and Walczak have pushed in a new direction—literally. They digitally “sculpted” the film’s cast of animated characters using Geomagic Freeform software from 3D Systems. The FreeForm haptic system, which consists of software and an input device called “the Phantom,” allowed filmmakers to “touch” each character model displayed onscreen and mold a wide range of naturalistic expressions for their CG cast. Essentially, they treated each digital model as if it were a maquette.

“Each model started out as a cube, which Diana worked like she would a sculpture,” Kleiser explains. “It’s amazing to ‘feel’ this—you can bump up against it and push on it and mold it like clay. If you push on the forehead, you’ll create an indentation. It responds to the direction that you’re pushing and the power with which you’re pushing.”  Walczak first roughed out a general shape for each model and then worked in higher resolutions and closer views to sculpt more precise features, such as eyelids.

“She could ‘dial up’ and insert as much detail as she needed,” says Kleiser. “It’s an efficient database. There’s high detail where there needs to be and less detail where it’s not required.” Walczak manipulated the Phantom to create the different facial shapes that comprised each character’s basic expressions and phonetic positions. She was able to work quickly, creating a complex character in about a day. The resulting “sculpted references” provided animators with an idea of what each character’s face should look like.

“We spent a long time getting these characters’ facial shapes to be correct, so when we got into animation everything could be animated quickly,” Kleiser adds. He notes that it was necessary to put in the extra effort because the script slated humans and mythical beasts for close-ups on a 30 by 40 foot screen.

The Kleiser-Walczak team translated the data generated by FreeForm  into Maya. The subsequent process of modeling, animating, and rendering in Maya was complex because of the high level of detail involved.

“We have forests of gnarly trees with thousands of leaves,” says Kleiser, “and these characters aren’t wearing Spandex like the Spider-Man characters did—they’re wearing tweeds!”

Kleiser-Walczak tested images extensively with audiences to discern where their 3D effects became invisible. When visitors to Busch Gardens climb aboard the 60-seat Reflectone platform to experience Corkscrew Hill, they will be watching 3D stereo images projected in a new way. Minneapolis, Minn.-based systems designer Electrosonic, who collaborated with Kleiser-Walczak on Spiderman’s 70mm film sys t e m s, configured four Barco projector-based imaging by rotating them on their sides. Two projectors handle the left and right eye images for each half of a vertically divided screen.  “By doing edge blending down the middle, we basically got film resolution,” Kleiser explains. “It looks phenomenally bright and sharp and the 3D works really well.”

One of the advantages of keeping Corkscrew Hill in the digital realm from start to finish, says Kleiser, is that filmmakers avoided the sometimes nerve-wracking film-out process.

“If one frame is bad then the whole thing is bad,” notes Kleiser. “Whereas with data, if you have a bad frame, you just re-render that frame and insert it.”  In designing and executing the ambitious project, Kleiser admits that filmmakers filled the film with “a lot of stuff. When it’s your project, you tend to pour everything into it,” he laughs. “We got carried away!”