Hidden inside his brightly decorated coffin, the face of Nesperennub, priest of Karnak, has remained a mystery for thousands of years. The question of what this mummified corpse looked like when it was alive, will no longer be unanswered thanks to Dr Wilkinson, a leading forensic reconstruction expert, and Geomagic FreeForm, a unique 3-D touch-enabled digital sculpting system developed by 3D Systems.

Dr Wilkinson recreated the Egyptian mummy’s head using this state-of the art technology, and, remarkably, answered the 3,000-year-old mystery without removing a single bandage. “This unique, computerized facial reconstruction system allows us to feel as well as visualize, the skull of an ancient Egyptian without unwrapping the mummy,” said Dr Wilkinson. Geomagic FreeForm enables customers to develop products from concept design to digital pattern making by moving from a traditional, physical model-making process to a digital one. Dr Wilkinson used the intuitive software, which includes the Phantom® haptic device, and allows feeling the surface of the clay model that is being sculpted on screen. This is a touch-based application for 3D design that allows an intuitive interaction with the digital world. 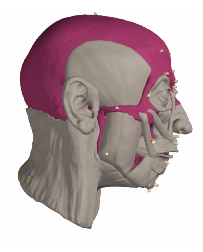 Recreating the mummy without removing a single bandage was completed by importing the skull surface into the FreeForm Modeling Plus system as an STL file using data collected from CT scans. Facial anthropologist Dr Wilkinson, manager of Manchester University’s Unit of Art in Medicine, converted the data from the scan into both, a physical cast of the skull, and a digital 3D model of the skull on the computer. The cast was made via stereo lithography at PDR based in Cardiff University.

Asked about Dr Wilkinson’s opinion of the conventional method versus the new digital process, she responded that the two techniques follow the same methodology and will produce the same face. However, the computerized method allows for quicker and easier skull reassembly and remodeling when it is fragmented and with missing pieces. It is also easier and quicker to add extra estimated details (such as hair, color) to the finished digital face. Using a process of applying digital clay to build up levels of muscle – Dr Wilkinson developed the physical clay model of how the head would have looked. Simultaneously, by adapting the advanced 3D software, she came up with a similar digital 3D model that could be viewed on screen. Dr Wilkinson further explains that, by FreeForm, “A digital library bank of facial muscles was created, containing sixteen facial muscles and the parotid glands. Each muscle was imported and placed onto the skull, altering the shape and size by utilizing the 3D deformation tools.” The databank contains a number of ears and noses, produced from surface scans, and which could be imported and placed onto each facial model. These features were then further customized to relate to the bone structure of the skull. Muscles and features can be sculpted using FreeForm sculpting tools of a variety of shapes and sizes, and tools such as carve, smooth, tug, attract, smudge and mirror.

“The data bank of muscles and facial features allowed a more rapid and streamlined approach to the three-dimensional facial reconstruction, whilst the digital sculpting tools preserve the attention to skeletal detail and intuitive sculptural skills”, emphasized Dr Wilkinson. 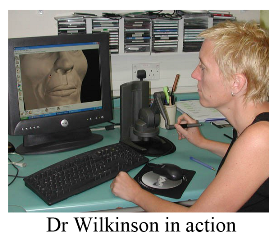 The final sculptural stage was the addition of a skin layer over the muscle structure. “This followed the shape that the facial anatomy had already defined while adding the appropriate subcutaneous fat and skin layers”, Dr Wilkinson explained. Final aesthetic additions to the finished head, such as hair, eye color and skin color produced a convincingly realistic facial appearance. The virtual model is now at the center of an exhibition at the British Museum – Mummy: The Inside Story. “It is incredible to see someone who was alive 3,000 years ago and have an idea of what they looked like,” said exhibition project manager Alec Shaw. “This gives him some kind of personality. He has a very strong jaw.” 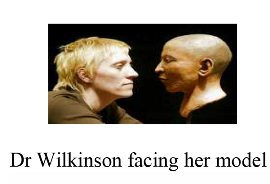 Geomagic FreeForm follows the procedure of the manual facial reconstruction technique, and therefore has the same accuracy and reliability. The touch-enabled system allows the same intuitive interaction with the clay that produces realistic and aesthetically pleasing faces. Wilkinson is excited about results showing good overall resemblance production and realism. “The system operator does need to be trained in facial reconstruction, and in a similar way to the manual method, the resulting reconstruction will vary in quality dependant on the skills of the operator. The advantages of FreeForm - system-speed, reproducibility and decreased damage to the original specimen”, she added.