Although he’s not one for clichés, Rus Emerick, process improvement specialist at Schneider Electric, endorses this one: “The whole is greater than the sum of its parts.”

This concept, which dates back to Aristotle, is at the core of an approach called functional analysis that has implications throughout Schneider-Electric, a company with nearly 90,000 employees in 130 countries.

“Instead of looking at dimensions of individual parts, we are now able to analyze functionality as a major element of an entire assembly’s analysis,” says Emerick.  “We simulate how parts exist in the real world, especially how they relate to their mating parts.  We’ve saved a lot of time and material by validating our predicted functional conditions.” 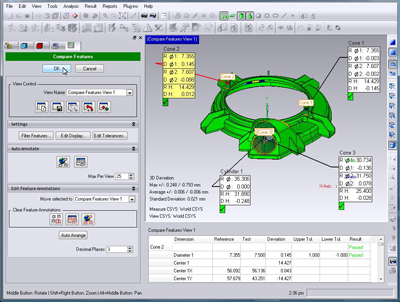 Out of theoretical, into real

Emerick uses a hole and a pin as an example of how functional analysis works.  It is difficult and time-consuming to measure all possible cross-sections of the hole, and the 2D measurements often don’t have a close relationship to the fit of a cylinder into the hole.  The hole also might be constrained in its XY location relative to another location, which might restrain the possible size of an inserted pin.

Feature inspection in Geomagic Control acts as a virtual pin gauge, describing the wall location and recalculating the largest possible diameter of a pin that will fit in the hole, all the while maintaining the original constraints.  This gives users insight into the behavior and fit of a functional cylindrical feature rather than just the center location. 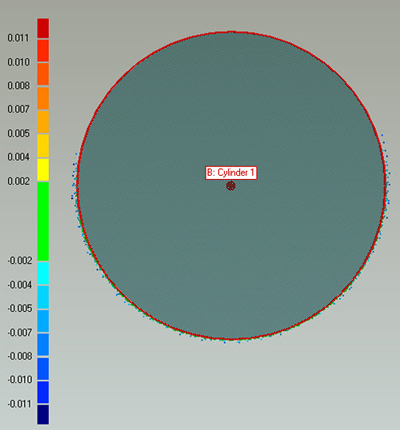 Image above: Feature inspection in Geomagic Control acts as a virtual pin gauge, describing the wall location and recalculating the largest possible diameter of a pin that will fit in the hole.  Image courtesy of Schneider-Electric.

“It’s like when you go to Dunkin’ Donuts,” says Emerick.  “You’re not interested in the hole, but what surrounds the hole; it’s the same thing with a part within an assembly.  It’s not the center of the hole, but the contact location that determines whether it will function with other parts as it is intended.  The ability to analyze fit takes contact datum out of the theoretical world into the real world.”

A surprising advantage of being able to analyze based on function is that many more parts can be accepted without compromising standards.  That’s because an assembly often functions like a team, with the whole working together to overcome individual weaknesses.

“In many cases when individual parts are measured, they fail to meet tolerances,” says Emerick.  “But an assembly can distribute tolerances throughout the chain of individual parts, and the assembly meets Six Sigma standards. This has tremendous cost and material implications.”

Image below: The hole and the pin are brought together in Geomagic software, showing how they will function in the real world.  Image courtesy of Schneider-Electric. 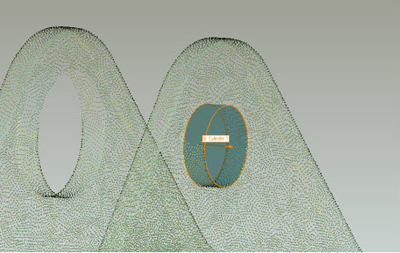 Thanks to company-wide adoption of 3D inspection processes from Geomagic, functional analysis has permutations throughout Schneider Electric.  It drives a philosophy that Emerick calls “Design Anywhere, Build Anywhere, Qualify Anywhere.”

3D inspection describes the use of 3D scanning technologies to close the loop between physical products and their digital representations.  The key component for Schneider Electric is Geomagic software, both Geomagic Control for quality inspection and Geomagic Design X for digital reconstruction.

Implementation of Geomagic within Schneider Electric works a bit like a pyramid scheme, except in a positive way.  Approximately 50 “super users” in seven regional centers – two in the U.S. (Cedar Rapids, Iowa, and Columbia, Missouri), two in France (Grenoble and Angouleme), two in Shanghai, and one in Bangalore, India – head up training and implementation of Geomagic software.  The superusers combine an in-depth knowledge of Geomagic software with old-school inspection skills.

“These are grizzled veterans who are the modern-day equivalents of the old-time fact checkers,” says Emerick.  “They are the depository of years of knowledge and have a deep understanding of how things work.  They pass down the knowledge on how to do something well.  We’ve found that peer-to-peer mentoring develops the best users.”

At Schneider Electric, Geomagic users are broken down into three categories:

Schneider Electric’s system is not only thorough, it spreads knowledge fast: Emerick says it took only six months after the introduction of Geomagic Control for the company to add functional analysis across multiple applications.

Under the “Design Anywhere, Build Anywhere, Qualify Anywhere” approach, analysis results obtained with Geomagic software are leveraged throughout the company.  It’s one data set, with multiple users and multiple solutions, according to Emerick.  Applications include design and verification, FAIR, LAIR, reverse engineering and documentation replacement, tool validation for predicting wear and making repairs, and functional analysis.

“The combination of Geomagic and our system of training allows true convergence across all cross functions of product development,” says Emerick.  “We can use the same data set to answer different functional questions: How well did the supplier do its job?  Is tooling faithful to the design? Is the part engineered to specifications? Can parts and assemblies be manufactured efficiently? Was the tolerance analysis accurate?”

It was only recently that the answers to many of these questions were speculative.  Now, using a single data set, deep, functional knowledge is available throughout the enterprise.  And, when it is time to replace a part, Schneider-Electric has a history of its 3D definition from each time it was scanned.

“Our virtual team around the world can now see how different parts work with one another,” says Emerick.  “It’s not theory, but real-world facts displayed visually so all can understand.  That has incredible company-wide benefits, including major reductions in time to market, and in the case of part evolution, faster return to market.”

Get a free trial!

Get a free trial!