The terracotta plaques that adorned the walls of central Italy’s ancient Samnite sanctuaries were artistically and architecturally impressive – so they say. A person wouldn’t know it by looking at the disjointed, worn-down fragments that survive today.

Since it is impossible to reconstruct the plaques from the remaining fragments, researchers with the Sangro Valley Project did the next best thing: they used Geomagic 3D reverse engineering software to digitally reconstruct a full 3D model of a plaque. The model is being used to create a physical prototype of a plaque, to construct a mold for manufacturing new versions, and to better understand how the ancient artifacts were made.

Picking Up the Pieces

The Sangro Valley Project – headed by Susan Kane of Oberlin College in Ohio and Edward Bispham of Oxford University – has conducted excavations at Monte Pallano in central Italy’s Abruzzo region since 1999. The excavations unearthed a sanctuary area, characterized by a terrace and retaining walls of a building dating back to the middle of the second century B.C. From the terrace fill, researchers found a number of terracotta pieces. Meaning “baked earth” in Italian, terracotta is unglazed fired clay used for architectural ornament and decoration.

To date, more than 300 fragments have been excavated from the site, many of which come from statuary and “high-relief” plaques that adorned the sanctuary buildings. High-relief is a sculptural technique in which the form extends three-dimensionally from the background.

The largest percentage of pieces recovered belong to the Hellenistic plaques made from a mold that depicts a pair of confronting dolphins on either side of a central floral ornament. The image is thought to represent the linking of mountain and sea, or this world to the next – a cultural symbol that is typical of the Hellenistic artistic style; emotional, dramatic, and often characterized by the interaction of sculptural forms with the surrounding space.

“This is the first phase of a larger research project that has two main goals: One, to reconstruct a prototype of the plaque’s original mold; and two, to describe quantitatively the variability of the relative sizes of the fragments,” Kane says. “Both these goals will help to understand the ancient manufacturing processes by which these tiles were made.”

The Sangro Valley Project’s first attempt at reconstruction was a sketch of the terracotta plaque as it might have looked originally, gleaning artistic details from the sparse fragments. Keith Swift of Oxford University made a preliminary illustration, but the relatively small number of fragments excavated at that time required the plaque’s left side to simply be a reflection of its right.

A year later, Sam Carrier of Oberlin College took the sketch one step further, using Adobe Photoshop to merge together individual photographs of more than 20 pieces, revealing how they fit together in the original form.

“During photographic reconstruction it became apparent that the fragments came from tiles of different sizes, since individual fragments needed to be rescaled as well as moved and rotated in order to overlap appropriately,” Kane says.

The original tile was manufactured with far less tolerance than is standard today – with as much as 10 percent variation in size from plaque to plaque caused by shrinkage of the clay during air-drying and firing.

While informative, the two-dimensional reconstructions were limited – essentially showing the plaques’ main visual features, but not fully conveying depth or detail. Researchers needed a three-dimensional model that more properly reflected the artistic elements of the plaque. Moving from 2D to 3D, however, wasn’t without complications.

In addition to having only fragments to work from and variations in size, the plaques were damaged in antiquity – taken from the building during its demolition and used as packing debris, Kane says. And, of course, the fragments lay under the earth for more than two millennia, and may have been damaged by picks and trowels during their excavation.

“Imagine creating a hundred different jigsaw puzzles from a single image, cutting the pieces in different sizes and shapes for each puzzle,” Kane says. “Each section of the image is now represented in different pieces for each puzzle, each piece covering a slightly different area of the original image. Now imagine that the puzzles are made from images that vary in size. Randomly select a few pieces from each puzzle and try to reconstruct the underlying image from them. You can’t do this simply by fitting the pieces together; you have to fit the image together by overlaying image segments.”

From fragments to 3D model

The first step in recreating the plaques in 3D was scanning 76 individual fragments – out of more than 300 excavated – using a Konica-Minolta VIVID 900 laser scanner. Since the objects had to remain with the Archaeological Superintendency in Italy, data capture and initial processing was completed within a one-month field season. 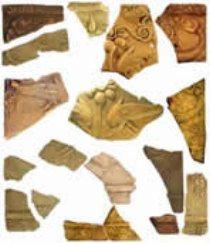 Fragments that were the basis for digital reconstruction of an ancient terracotta plaque. 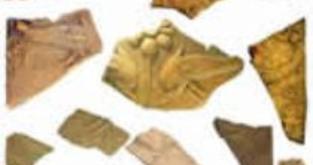 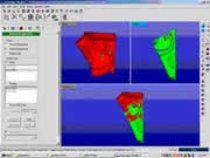 Registration of the terracotta plaque fragments within Geomagic Wrap. 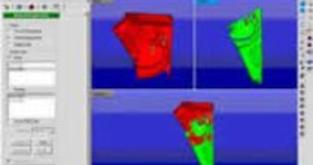 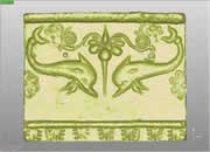 Completed model of a plaque from an ancient Samnite sanctuary, digitally reconstructed in Geomagic Wrap from fragments buried for more than two millennia. 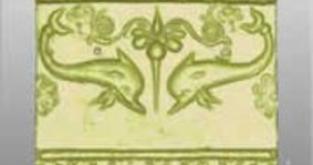 Registration of the terracotta plaque fragments within Geomagic Studio

Each fragment was placed on a rotary stage and scanned in 60-degree increments. Point cloud data was assembled from the individual scans using 3D Systems' Geomagic software bundled with the Konica Minolta scanner. Outliers, portions of the rotary stage, and other periphery objects were removed from the composite point cloud, which contained more than 3 million points. The point cloud was brought into Geomagic Studio, software that is used by manufacturers to digitally reconstruct and redesign physical products and parts. A triangular mesh was constructed, and a best-fitting NURBS surface was automatically computed and displayed within Geomagic Studio.

Because many of the fragments were from different tiles, joining of the individual 3D models like puzzle pieces wasn’t always possible. Instead, researchers had to merge them together within Geomagic Studio, selecting those that were relatively large and that had clearly recognizable features in common – floral spirals or segments of a dolphin tail, for example.

Registration points were then identified on the pairs of fragments, and the fragments were merged based upon their geometry to form a single piece. This process was repeated, merging each new piece into the composite, until the entire tile was reconstructed.

Researchers from the Sangro Valley Project plan to use the digital model in a few different ways.

Initially, it will be used for rapid prototyping a replica of the dolphin plaque for display at an international conference this winter and at the excavation site next summer.

“The manufactured replica is a way of bringing back something to the people of the local communities whose heritage we are exploring with our work,” Kane says. “People will be able to touch an actual object, rather than manipulate a 3D model on a computer screen. This moves them closer to what would have existed in antiquity.”

The model will also be used to construct a mold that will enable the team to manufacture a new series of replica terracotta plaques.

Finally, Geomagic Qualify computer-aided inspection software will be used to compare scans of the ancient fragments with equivalent segments of the digital model. Furthermore, the team will examine samples of the clay to determine its type and what might have been added for strength. The findings will be used to vary the composition of the clay and firing conditions for manufactured replicas, which can be again scanned and compared to the digital model. As the replicas move closer in composition to the original, the team expects to gain insight into ancient manufacturing processes – especially the effect of shrinkage.

“Working backwards with this experimental archaeology approach, we expect to learn about the technology that was needed and used in the second century B.C.,” Kane says. “It’s our initial foray into scanning technology. Before this, we measured archaeological artifacts with calipers. This technology has opened up entirely new lines of investigation.”