“More, better, faster” is probably the mantra of every manufacturer, especially as it applies to quality inspection.

Howmet, a division of Alcoa that manufactures compressor and turbine blades for aircraft jet engines, thinks it has found the solution to the “more-faster-better” inspection dilemma. The company has implemented a new first-article inspection process that combines a GOM white-light scanner with computer-aided-inspection software from Geomagic by 3D Systems.

“The combination gives us the ability to perform our inspections on a greater number of parts in a shorter amount of time,” says Steve Vanderkooi, an engineering support manager who has been involved with inspection at Howmet for 32 years.

Howmet performs a 100-percent dimensional inspection for each new part. The process involves verifying every feature on the part and comparing it to a customer-supplied part print or a 3D CAD model. First-article inspections are done prior to full production release and often while a part is in development.

The new process at Howmet replaces a CMM system with GOM’s ATOS II scanner, which can capture and calculate precise 3D coordinates for up to 1.3 million points in about seven seconds.

“The CMMs that we used previously captured only a few points in the time that the ATOS II scanner can capture hundreds of thousands,” Vanderkooi says, “so we’re now able to do a more thorough inspection in less time. The ease-of-use of both the scanner and Geomagic Control (previously named Geomagic Qualify) software also play a key role in speeding inspection and making results easier to analyze.”

The ATOS II system digitizes a physical part by projecting patterns from a white-light projector onto the object’s surface. The patterns are captured by two cameras at either side of the sensor head. As the object is scanned, the areas in which measurements have been recorded are displayed on the computer screen. The system monitors its calibration and the effects of the environment to ensure reliable measurement in rough industrial conditions. Measurements from the scanner are automatically transformed into a common object coordinate system.

Howmet saves the complete 3D data set of the scanned blade as an STL file and brings it into Geomagic Control, where it is compared to the CAD model of the object.

Turbine blade inspection poses some unique challenges, such as analyzing the twist of a newly manufactured blade compared to the CAD model. This is difficult using a CMM system, which depends on the operator to accurately capture the points that will show whether or not the blade is twisted within the allowable tolerance. Often, there is not enough point data to make an accurate comparison.

Howmet uses a feature in Geomagic Control to automate twist analysis. The software allows Howmet to align a cross-section of the scanned model to reference data, and automatically generate statistics on the twist of the blade. Constraints can be placed on maximum rotation and twist tolerance.

“Geomagic worked with us to add new functionality to the software and answer any questions that we had while we were testing the product,” says Vanderkooi. “That made us comfortable in choosing it for current and future first-article inspection.”

In addition to specific turbine analysis functionality, Howmet is benefiting from new automation for geometric dimensioning and tolerance (GD&T). Much of what used to take special in-house codes and expertise can now be done in a few simple steps within Geomagic Control, according to Vanderkooi.

With the new process, a GD&T callout can be created on the 3D model with a click of a mouse. The model with callouts can be manipulated interactively, and a single view can have multiple callouts, all of which can be edited. A one-button command performs evaluation of callouts on the test data, creating views, annotations and tables of the results. Results can be displayed as a simple pass/fail (green/red) display, or as a detailed color map showing different levels of variance. All test data is automatically recorded in a graphical report that can be output in HTML, PDF, Microsoft Word or Excel formats.

The new capabilities provided by computer-aided inspection have not come a moment too soon for Howmet. Increasingly, the company is facing the demand for more quality inspection results in less time.

“Customers are moving quickly to statistically based inspections in which the qualification is based not on a single piece, but on a sampling of parts,” says Vanderkooi. “New part inspection would take much longer to complete if we had not implemented automation to minimize inspection time.”

Traditionally, studies based on a sampling of parts are done using CMM to generate metrics on dimensions for each part. This is a time-consuming process since each part must be measured individually. Data is then typically transferred to an analytic program, evaluated, then published.

Vanderkooi is replacing the CMM-based process with automated trend analysis within Geomagic Control. Once a part is scanned and a report is saved, the software automatically generates capability studies defined by Howmet. Batch processing enables non-technical users to collect data and generate reports on a large number of parts. Statistical analysis tools within the software allow Howmet to compare parts for pre-defined factors such as repeatability, changes over time, and variations from part to part.

“The ability to create one inspection routine and automatically apply that routine to additional parts is critical to our business,” says Vanderkooi.

In the near future, Vanderkooi believes that the combination of the ATOS II scanner and Geomagic Control software will have a positive impact on every aspect of Howmet’s inspection processes, but for now, speed is the key.

“Speed of inspection is our main challenge,” says Vanderkooi. “Everyone wants the results yesterday. Our new process is helping us deliver complete results much quicker.” 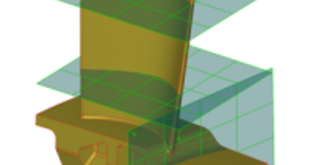 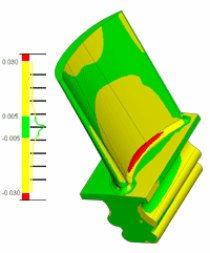 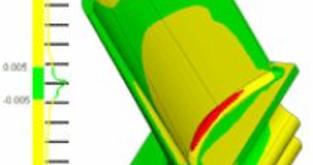 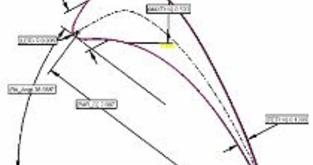