In the late 1460s the crew of a merchant ship sailed their vessel out of the Severn Estuary that flows between the southwest of England and South Wales and on up the River Usk to the Welsh town of Newport.

Here it was to undergo repair or possibly dismantling. Whatever the reason though, before anyone could get to work on her, the ship rolled over onto her side on the muddy shores of the tidal river and filled with mud. And there she stayed, 7 meters deep in the mud, until today. Now, nearly 550 years later, Geomagic Wrap 3D reverse engineering software is being used to help bring the ship and her contents back to life.

It was during deep excavations for the orchestra pit of Newport’s new theater and arts center that the archaeologists contracted to record any interesting historical material that might turn up discovered the remains of a timber drain and a cobbled floor that may have been part of a quay. Thought to date to the 18th or early 19th century, these were removed and underneath were discovered some large timbers, which the archaeologists thought could be part of a ship.

Further digging confirmed that they were indeed part of the substantial remains of a 15th century merchant ship, which is now known as the Newport Medieval Ship.

The main dig around the medieval ship found in the original harbor area in Newport, Wales

Built in approximately 1446, in the period often called The Age of Discovery, the Newport Medieval Ship was a large merchant ship measuring some 30m (100 ft) long at the keel and with an overall hull length of around 35m (117 ft). Probably built in France, somewhere along the Bay of Biscay coast, she predates the voyages to the Americas of explorers such as Christopher Columbus and John Cabot. Today, with 26m of her remaining, she is one of the best preserved and most complete examples of a ship of this age and design to have been discovered and excavated to date, anywhere in the world.

Even so, the ravages of time together with some damage caused during the theater and arts center construction works mean that only part of the ship – albeit a substantial part - was able to be recovered: some two-thirds of the starboard side, about a third of the port side and much of the internal structure. But this has been enough for the team of archaeologists engaged in preserving and recording her and her contents to work out the Newport Medieval Ship’s original complete hull form.

The task being undertaken by the team now is to digitally capture the recovered timbers of the ship and many of the one thousand-plus artifacts found inside her.  These include wine casks, shoes, cannon balls, archery equipment such as wrist guards, defensive weapons, coins, ceramics and even fish and meat bones complete with butchery marks – not to mention rat and dog tooth marks!

Toby Jones, curator of the Newport Medieval Ship, explains that the aims of the project are to digitally record the remains of the ship, to build a 1:10 scale physical model of her as she was in the fifteenth century, and to produce accurate physical replicas of many of the artifacts found in her. These physical models will be used for educational and display purposes, while the digital models from which they are being produced will be used for archiving and publishing purposes.

The first task has been to digitally capture the ship’s timbers using a FARO Arm touch probe. Data from this exercise is being used to create CAD models and 2D drawings for use in the reproduction of the individual structural timbers and the planks that formed the clinker-built hull. These are being used in the building of the 1:10 scale physical model.

A Parrel artifact discovered during the dig and scanned for archive 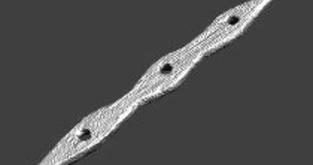 A pulley, still very intact, recovered during the dig and scanned 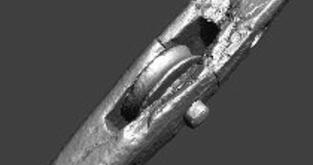