The Virgin Mary that presides over all who enter the Cathedral of Our Lady of the Angels in Los Angeles stands eight feet tall and weighs 1,000 pounds. With braided hair, simple clothing and bare head and arms, this Virgin Mary varies from the traditional, as did the methods used to create the statue.

The Virgin Mary is the work of sculptor Robert Graham, who also created the Cathedral doors, which are 20 feet tall and weigh a combined 25 tons. Graham’s L-shaped outer doors frame cast-bronze inner doors depicting various manifestations of the Virgin Mary. Topping the doors is a tympanum - a gilded architectural detail on which the statue stands.

Graham is noted for his large-scale work, including the Olympic Gateway for the 1984 Los Angeles Olympics, and statues of American icons Joe Louis, Duke Ellington and Franklin Delano Roosevelt. For the Virgin Mary, he started with a 30-inch sculpture made from plastilene, an oil- and wax-based clay that holds detail but does not harden. He then created a mold and polyurethane cast that was used to design the statue's clothing. Once this version was approved by the Archdiocese of Los Angeles, it was taken to Scansite in Woodacre, CA, to be 3D scanned and digitized.

Before the scanning, the polyurethane cast was painted gray to ensure a flat, even scan. The figure was scanned using a Cyberware MM laser scanner for the head and a Cyberware MS3030 for the remaining body parts.

“Once the point cloud data were collected from multiple scans of the entire piece, we cut the figure into pieces for detailed scans of the head, body, arms, hands and feet,” says Noriko Fujinami, director of Robert Graham Studios.

Scansite merged data of varying resolutions from each of the scans to create a highly detailed point cloud model of the entire figure. The final file contained more than 1.7 million points.

The point-cloud data were organized and input into Geomagic Wrap software from 3D Systems. Geomagic Wrap is used for 3D reverse engineering, the process of capturing a physical object, often through 3D point clouds, and automatically turning it into a digital model for design, engineering, mass customization and web-based marketing applications.

Scansite created a polygonal file of the statue in Geomagic Wrap. Engineers at Ctek, a service bureau in Tustin, CA, also used Geomagic Wrap to enlarge the figure from its original 30-inch size to its final 8-foot height.

“When you enlarge surface data in a polygonal file, you enlarge the facets, too,” says Javier Valdivieso, executive vice president at Ctek. “With Geomagic, we can use the subdivision tool to refine the surface and keep its tangent, no matter what the scale.”

The polygonal surfaces created in Geomagic Wrap also allowed the engineers to create a water-tight surface from which the volume of the finished piece could be determined. Using this volume, Valdivieso and his colleagues were able to create an internal armature to support the weight of the final bronze piece.

The resulting surfaces were output to milling machines at Ctek’s headquarters, where the full-sized figure was milled from clay in four separate pieces. According to Fujinami, each section was milled three percent larger than needed due to shrinkage caused by the bronze casting process. Once the parts were milled, they were transferred to Graham’s studio, where he resurfaced them by hand.

“Geomagic Wrap was the only software we found that was able to accurately reproduce the organic shapes from the original sculpture,” says Valdivieso. “Mr. Graham puts a lot of detail into his sculptures – muscles, hair, wrinkles. We wanted to ensure that those details would transfer to the larger scale.”

Majestic Without the Trappings

After the final clay pieces were completed, silicone rubber molds were made. Graham used the silicone molds to cast the bronze statue using the lost wax method. “The molds were filled with wax, which was then dipped in ceramic shell to create a durable mold around the wax,” says Fujinami. “The wax was melted out of the ceramic and the mold filled with molten bronze, creating a close replica of the original sculpture.”

The bronze pieces were assembled and welded, and the finished figure was sandblasted and patinated in silver nitrate.

The final statue was transported from Robert Graham’s studio and assembled at the Cathedral site with the sections of the doors. The Cathedral was dedicated September 2, 2002 by Cardinal Roger M. Mahony, the archbishop of Los Angeles.

Technology was central to achieving the detail and subtlety required to convey Graham’s vision. “The challenge I set was to make her majestic while dispensing with all the usual trapping and signals of majesty,” says Graham. “No crown, no scepter, no throne, etc., only her regal beauty, her invincible self-possession, and the abstract perfection of her gown, like an apparition in its wrinkle-free smoothness and impossible triangle symmetry.” 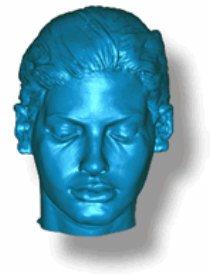 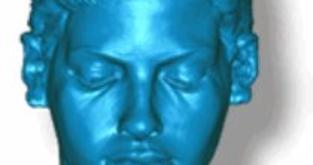 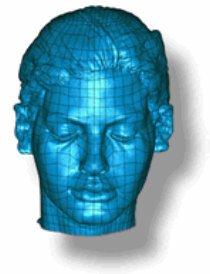 The polygonized mesh was brought into the CAD system and organized into 1,632 patches in preparation for NURBS surfacing. 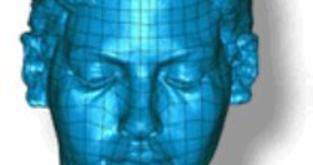 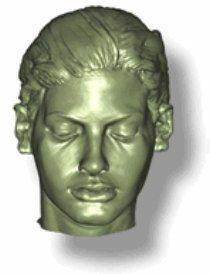 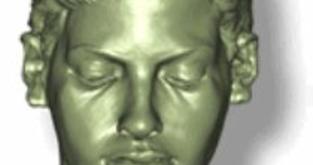 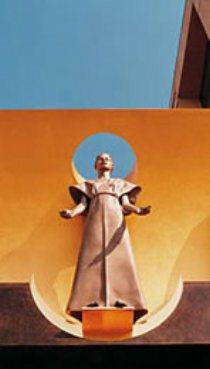 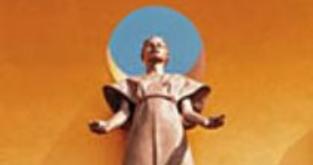