Trinity is a full-service forge out of Mansfield, Texas that specializes in accommodating the most unique of customer requests with exacting standards, personal service and fast turnaround times. In addition to forging and die design, it offers heat treating, machining, assembling, plating, painting, material testing, and certification. The first commercial closed die forge in the United States to receive ISO-9000 certification, Trinity is also the first U.S. forge shop to earn AS 9100 certification which confirms its ability to meet the precision required by the military and aerospace industries.

Trinity Forge specializes in closed-die forging, also known as impression-die forging, which involves placing metal into a mold with both upper and lower preformed parts that come together to completely enclose the workpiece. The process can involve pressing, pounding or squeeze metal under great pressure and usually hot temperatures which can be as high as 2300 degrees Fahrenheit. If a drop hammer is used to force the metal into the entirety of the mold, its striking force can range anywhere from 11,000 to 425,000 pounds. Parts can be created as light as a few ounces and up to 100 lbs, and typically, forged parts are much stronger than those which are machined or cast.

Since its beginning in 1955 when freely falling gravity drop hammers were commonplace, and parts heavier than 10 pounds were a near impossibility, Trinity Forge has continued to keep abreast of current advances.  Recently they implemented the use of the FARO Laser ScanArm® scanner with the Geomagic® Design X and Geomagic® Control software suite, a decision made based on Trinity’s familiarity with the local Faro representative and Geomagic’s reputation. Todd Sheppard, VP Quality, and Engineering at Trinity remarked, “It best suited the high level of scanning and scan comparisons that we intended to do. Jeff was good with it and thought we could pick up on it quickly. I had seen the product in the past and had heard good things about it.”

Having worked with scanned images for over ten years, Trinity Forge quickly obtained a grasp on the main functionalities of the Geomagic software and experienced only a slight learning curve. “But we quickly got the hang of it,” Sheppard noted.

In the year since the adoption, Trinity has been able to apply this latest technology in all areas of the production process. “We use Geomagic Design X on die scans to approve the machining, to compare die wear scans to original die scans, to make part models from a die scan or a legacy wood pattern, to validate machined components for our maintenance area and occasionally to validate tight inspection areas back to our CMM data,” said Sheppard.

Not only has Geomagic Control enabled Trinity to inspect reworked dies by validating the CNC machining relative to the Pro/ENGINEER, (now Creo™ Elements/Pro™), models, but now the engineers can track die to wear by comparing the original die face scan to the current die face scan, or model.  With Geomagic, it is becoming increasingly possible to ascertain the time, processes and potential causes of a die’s degradation. “The way we use scanning it works great for inspection of new dies and better for inspection of worn dies," stated Sheppard. "We have actually changed die designs based on the information we gleaned from these scans.”

On a recent project, Geomagic helped Trinity Forge make crucial decisions for a manufacturer that specializes in the entertainment of children at theme parks. With this job, the forge dies already existed, and no changes were necessary for the die scan models. “By scanning the dies and using Geomagic Design X to reverse engineer models, we could get a good indication of where we were at, relative to the tolerances given,” Sheppard said. “It helped us solve the very important issue of material size. Getting material can sometimes take a while. The sooner we know the size, the sooner we can begin to find that material size.”

Sheppard continued: “The way we did this was using the die scan models in our Deform engineering software, (Scientific Forming Technologies Corp), which enables designers to analyze metal forming, heat treatment, machining and mechanical joining processes on the computer rather than the shop floor using trial and error. By doing this we were able to modify our approach to the process and change the material size to something we know would work.”

Before Geomagic, the time necessary to complete the run would have been much more extensive. “In the old days finding out the material size would have been done by waiting until the dies were prepped to run, setting up the dies in the forge shop, figuring out the billet size and the process of then taking down the setup. Next, we would have to order the material, modify our process per trial and error and then we could finally make the forgings. As you can see,”  Sheppard said, “we not only saved weeks, probably three to four, of time, but valuable hammer time, probably three hours per setup/tryout, and there would have been two of those at a rough cost of around $5000, as well as optimizing the life of the dies.”

Sheppard described another recent project. “We were modifying a 6 ¼ regular lugdie, a downhole drill bit section. We first scanned the pattern. Once we had used Geomagic to clean-up the scan, we created a model from the point scan using the “Exact Surface” function in Geomagic Studio. We then modified the scan using Pro/ENGINEER. The customer wanted the shoulder lengthened 9/16”. So, now the scan of the pattern has been altered to meet our customer's requirements. He already has an existing tool that does not have the additional length. Next, we scan both the top and bottom die halves. We again use Geomagic to clean up the scans and reverse engineer die models so they are useable for us to proceed. Once completed, we assemble the newly modified pattern scan into each die scan half individually.  We extract the material we need to remove in the die halves using Pro/ENGINEER and thus create a die model ready to add tool paths to, and then machine.”

Engineering Assistant Tommy Phelps added: “After the dies had been updated to the customer’s modifications, we scanned the dies again, and using Geomagic Control, we checked the updated dies to the modified models, giving us a comparison report to see if we had indeed captured the updates correctly. Except for the original pattern sent to us by the customer and the updated plaster mold from the dies that we sent back, we did not have any additional time where we had to wait on a plaster cast or molding in order to proceed. By using both Geomagic Design X and Geomagic Control in tandem to check and verify our work, we effectively cut out anywhere from 4 to 8 hours per cast of downtime due to the plaster casts that we would have had to take, and have taken, in previous years.”

Trinity Forge is constantly looking for opportunities to increase efficiency, improve quality and streamline processes, and its partnering with Faro and Geomagic has proven advantageous to all three. Geomagic continues to point the way forward as Trinity Forge continues to position themselves on the cutting edge of manufacturing technology. 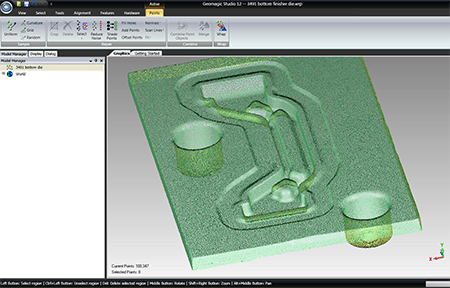 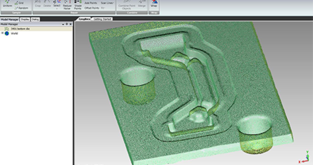 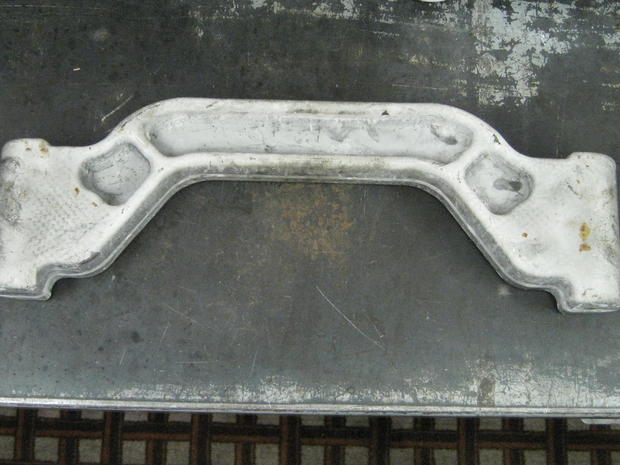 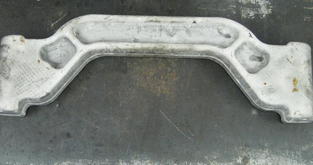