How Malcolm Demille Made Art His Bottom Line with Geomagic Freeform

“To have creative talent is awesome,” says Malcolm DeMille, master sculptor and designer. “But if you don’t know how to actually build it and can’t make it accessible, then it’s all in vain.”

“To have creative talent is awesome,” says Malcolm DeMille, master sculptor and designer. “But if you don’t know how to actually build it and can’t make it accessible, then it’s all in vain.”

It’s the conundrum of the starving artist: how to make money and keep doing what you love. How to meld raw aesthetics with boxy business. How to efficiently create quality, marketable artistic pieces. 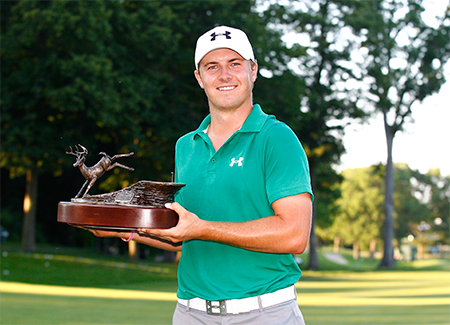 To see his mission through, he tapped technology as a way to promote harmony between art and business while preserving the organic, creative heart of his work. For the better part of a decade, one of his primary tools has been Geomagic Freeform 3D modeling software. At its core, Geomagic Freeform helps artists and designers maintain some of the tactile character of hand sculpting while also making for quick manufacturing preparation, mold preparation and 3D printing. The platform uses digital clay and haptic force-feedback so users can actually feel their 3D virtual sculptures, and it has all the efficiency and timesaving benefits of a digital workflow. It’s art for manufacturing.

Thirty-eight years later DeMille is going strong as the owner and chief sculptor at Malcolm DeMille Jewelers, Sculptors and Artisans. With a team of 15–20 employees, DeMille’s company has established itself as a major trophy supplier for the Professional Golf Association (PGA). The AT&T National, the John Deere Classic, The Greenbrier Classic, and numerous other tournaments have all featured exclusive sculptural trophies by DeMille. Beyond these large, one-of-a-kind pieces, he also produces several stock sculptural trophies, trophy tray awards, money clips, jewelry, belt buckles and a range of other accessories. You might say that possibilities have multiplied over the years.

They’ve multiplied because he’s found a way to create art with intention. In fact, he’s started to enjoy the process of making a piece of art that he can easily segment in Freeform, mold for reproduction and manufacture. Now his employees can easily assemble and manufacture pieces in large quantities, which has enabled him to introduce what has become a major part of his business: the Custom Club program. The Custom Club affords members, who pay for one of three membership levels, unlimited reproductions of their logo for a one-time fee. It’s an economical way for customers to set themselves apart with hand-crafted memorabilia, like golf ball markers, cufflinks, pins, wine stoppers or a myriad of other possibilities.

Success is good. But in talking to DeMille, you get the feeling that no accolade would be worthwhile if it meant diminishing himself as an artist. “We make art pieces and fine jewelry that become gifts and trophies,” says DeMille. “You don’t find them in a trophy shop, you find them in art galleries.” Thankfully, he hasn’t had to sacrifice anything. Because, with Freeform, he’s able to still use the hand sculpting methods that he grew up with.

This craftsmanship is vital to his clients too, who don’t want pieces that look, well, cheap. “We cannot have things that look like they came from a machine or a mill,” echoes DeMille. They don’t, because DeMille still uses hand sculpting in virtually every project he works on, whether he’s refining a scan of hand-sculpted clay in Freeform or physically tweaking a model he first created in Freeform. While the software can be a beginning-to-end modeling solution, DeMille has mastered, to great effect, Freeform’s ability to augment and streamline trusted workflows rather than forcing the user to abandon them.

If there is one piece that exemplifies how far DeMille has come as an artist and businessman, it might just be the Greenbrier Classic trophy. This 18-inch diameter PGA event trophy, more so than any other, couldn’t just be designed and cast. It had to be perfectly segmented, split into easily manufacturable parts. It had to be precise, beautiful. This piece required all the tricks and workflows DeMille had developed over his career. So he designed and found a way to segment this expansive trophy in Freeform, then turned to manual methods for detailing and production. That’s where Freeform excels, in providing ultimate freedom of design and process. “Freeform does allow us more flexibility, potential and possibilities in a lot of tasks,” says DeMille.

One might even say that the key to DeMille’s success has been flexibility. Flexibility enables him to expertly blend sculpture, manufacturing, digital processes and old-world techniques. Flexibility allows him to change a hunk of metal into a work of art and to reproduce it thousands of times over. Flexibility is why Malcolm DeMille’s studio is known for successfully doing things that other’s can’t do. And finding a niche like that, whether from a business or an artistic perspective, is a great thing. 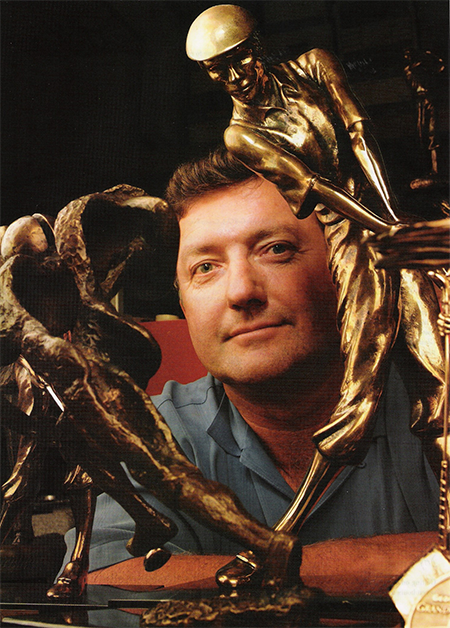