In 1999, Tokyo-based MIC, a toy model design company, had 6 employees and its revenue represented 10% of the profit of its parent company, Kuwagata. Now, in 2003, Kuwagata’s revenue continues to grow and MIC has more than 30 employees and its share of Kuwugata’s profit is 50%.

The reason for such impressive growth? Masaya Sasano, MIC’s President, says the explanation lies in their embrace of a new digital workflow, the cornerstone of which are six Geomagic FreeForm software seats from 3D Systems. MIC uses FreeForm as an integral part of many different types of workflows, including original design, reverse engineering, cleaning up of digital scans, and design for manufacture.

Incorporating digital tools into their workflows has enabled them to work faster, communicate better, and, ultimately save costs, which is absolutely vital in their business. Sasano-san explains that, in the past, toy companies such as Medicom Toy and Eishindo Co., Ltd. would set the price for a toy based on the cost of producing it, overhead, profit, and so on. Today, however, it is the customer who sets the price. And since the price the customer is willing to pay is lower than the cost of actually producing the toy using traditional methods, it would have been impossible for MIC to stay in business if they had not modified their traditional way of working and incorporated digital tools such FreeForm into their process.

One change to the old workflow has been removing the need for hand-made master models to be shipped literally around the world to licensors, manufacturers, and others critical to the design process. Instead, MIC sends e-mails and shares FreeForm digital files. Not only does this method save time, it eliminates the risk of model loss or breakage.

Equally important, communication has become much clearer and easier using digital tools. When MIC used traditional modeling processes, client feedback was often vague and abstract. Now, with the digitized files, computer screen images and 3D rapid prototype models made possible using the digital workflow, it is much easier to, as Sasano-san puts it, “complement the intended flavor of clients and developers.” Clearer communication leads more quickly to higher quality designs. 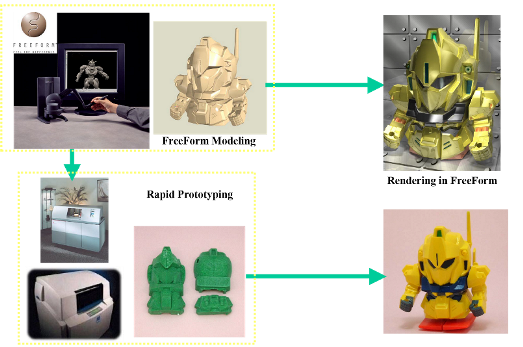 (Above) At MIC, models are rendered within Geomagic FreeForm (using the Visual Communications Package) or prototyped and then painted by hand.

Another digital advantage made possible by FreeForm is the ease with which MIC can change the size of a model. The final production size of the toys MIC designs is often less than 3 inches tall, which used to require laborious effort by modelers to design to scale. Modelers can now do most of their work in a size that is large enough for them to work comfortably. Then, when the model is done and its design approved, it is a simple matter to shrink the model in Freeform to a specific size, for example, the final production size, without loss of detail.

Working with the FreeForm has allowed MIC to reach a level of productivity that was impossible before. One example Sasano-san cites is a project where they were able to go from the original design of 14 unique soccer players to the finished product in just one month. “If we still worked only by hand,” Sasano-san declares, “that would have been impossible.” 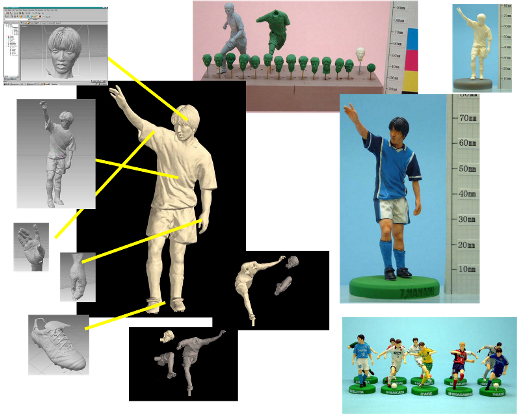 (Above) Using Geomagic FreeForm as a key component in its digital workflow, MIC finished 14 different soccer player models in just one month.

Using its digital tools, MIC has increased not only the amount of business it is doing, but the types of business it has been able to become involved in. Just recently it has added the following to its business repertoire: Customized chocolate figures – MIC scans the faces of brides-to-be, then uses FreeForm for scan cleaning and modifications. A silicon mold of the bride’s face is then made from a rapid prototype, and that mold is used to create customized chocolate gifts for the wedding guests.

It is no wonder MIC is the most prolific user of FreeForm in the Asia-Pacific region.

Models and photos courtesy of MIC and Masaya Sasano