Jeff Condon, president of TecNiq, a leading provider of LED lighting solutions, knows the territory between virtual and physical worlds like hikers know their favorite trails.

His company has developed software that performs billions of calculations to create the optimal balance between LED energy efficiency, lighting performance and cost. With the purchase in late 2015 of a 3D Systems ProJet® 6000 HD Stereolithography (SLA) printer, TecNiq is taking the power to translate great design into physical reality to a new level.

TecNiq is using the ProJet 6000 in almost every part of its business. On the engineering side, it has enabled TecNiq to experiment with more efficient methods of manufacturing and assembling plastic lenses, while reducing tooling errors. On the business side, it’s given TecNiq a tool to attract new clients and retain existing ones. 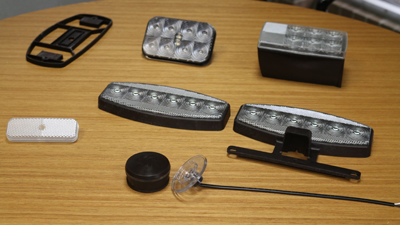 Surprisingly easy to use
The ProJet 6000 uses Stereolithography technology to create accurate and perfectly formed 3D printed parts and prototypes. It offers a maximum build platform size of 10 x 10 x 10 inches (250 x 250 x 250 mm) and a wide choice of materials that match or exceed the properties of traditional plastic materials.

While ease of use can sometimes be in the eye of the beholder, it’s a very real asset for the ProJet 6000 according to Condon.

“The ease of use is the biggest surprise,” he says. “We were concerned that it would take a dedicated expert to operate the machine, but we have multiple engineers running prints and technicians doing post-processing, all with minimal training.”

TecNiq’s transition to 3D printing was eased by 3D Systems reseller Scarlett Inc. (http://www.3dprintedparts.com/), which has 50 years of experience providing manufacturing technologies and services for companies throughout the Midwest United States.

“We spent time with the technician who set up the machine and watched as Scarlett made test patterns,” says Condon. “Our training was scheduled for three days after the setup and by the time it started we had already successfully run several parts on the machine. Over the next several months we continued to make improvements in post-processing and parts set-up.”

“Hands-down this machine makes parts that are orders of magnitudes better than anything else on the market,” says Condon. “The extreme resolution of the 3D prints allows us to manufacture production-quality lenses that demonstrate product performance to our customers before tooling the parts. Numerous customers have accepted a product very quickly after seeing the 3D printed prototypes.”

In addition to delivering superior prototypes, the ProJet 6000 has saved time and labor costs for TecNiq.

“Prior to this technology, we produced prototypes by direct machining in plastics, which is difficult and often not terribly representative of the final part performance,” says Condon. “The acrylic material used for direct machining has to be polished afterward and the polishing process distorts the geometry.”

Condon says that by adding a lacquer clear coat to the part printed with VisiJet® SL Clear material, TecNiq was able to match the surface quality of its manufactured products.

“In fact,” he says, “we have had two lamps that met DOT [U.S. Department of Transportation] output specifications right out of the printer, which is more than we had hoped to achieve.”

It’s not just the appearance of the 3D printed part that matches the final manufactured product, according to Condon.

“We have been able to check snap feature functionality and the general feel of the assembly for parts and modify them appropriately,” he says. “Without the ability to test the parts physically, we would have missed potential tooling problems. We’ve also drawn, printed and modified several design styles based on the different perception you have when holding a high-quality part in your hand.”

Profound effect on business
Condon believes that the ability to produce a prototype that conforms to the look, feel and performance of a final product is profoundly affecting TecNiq’s business.

“Customer decisions made since we’ve had this machine are delivering a measurable ROI,” he says. “We have printed many dozens of new and potentially new lights. The strength of being able to place a realistically functioning prototype into a customer’s hands is difficult to underestimate.”

In addition to prototyping for TecNiq’s LED business, Condon is now working with Scarlett to outsource time on the ProJet 6000 and was recently paired with a CNC customer to 3D print a few hundred custom electrical housings.

“The service business could eventually evolve into another company,” says Condon.

It all goes to show the opportunities that can arise when inventive minds connect with innovative technologies.

Discover how to increase agility in design and manufacturing

Find out how you can prototype in perfect Clear Materials