3D Systems employee, Dan Sample, understands the power of 3D printing through his work with the company’s Medical Modeling group. However, when the 4-wheel drive on his Toyota Tacoma truck failed early in 2015, he didn’t think it would apply here.

Living in Colorado, Dan relies on his 4-wheel drive throughout the year due to weather and terrain. On realizing it was non-functional, he took it to the usual repair shops for a few quotes. The mechanics all advised that the truck’s front differential actuator was broken and that a replacement part would cost around $300-$400, with labor being an additional $600. Dan was in shock. 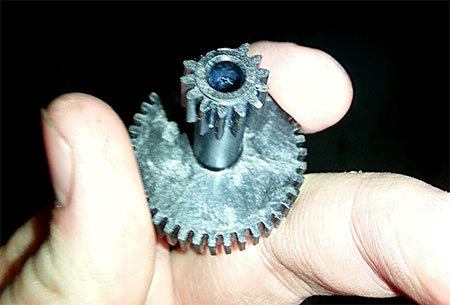 “I knew that the front actuator played a major role in the 4-wheel drive system but didn’t realize how major until I started researching the mechanics of how the part actually worked within the system,” says Dan. “I invited a few friends over one weekend and we got to work removing the actuator from the front axle.”

The actuator works to engage the 4-wheel drive of the vehicle and without it, his truck would remain only in 2-wheel drive. Dan got the entire actuator part out and noticed the external fixtures were still in working order and couldn’t figure out what was actually broken.  He and his friends decided to take a closer look; take the actuator apart and see if anything internally was wrong.

After discovering that one of the small plastic internal gears was broken he started searching the internet for a used replacement part in order to swap out the gear at a fraction of the cost. He realized that used actuators were difficult to locate and could mean a long wait to find one. Then the idea struck him – could he just scan the part and 3D print it? 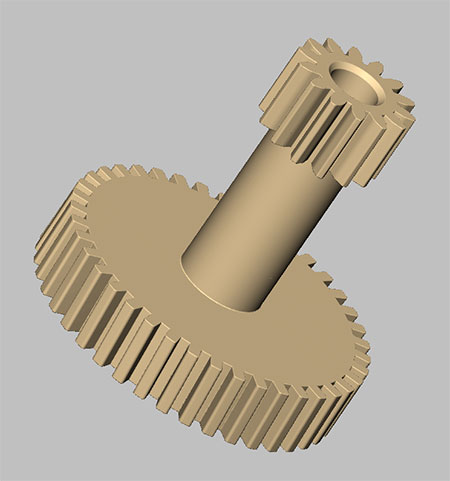 Back at the office, he scanned the part using a 3D Systems Geomagic Capture. On taking the scan data into Geomagic Freeform, he used the scan data to rebuild a 3D model of the gear. Geomagic Freeform easily uses 3D scan data on which a design can be perfected and finished using the unique sculpting tools in the software. With a finished design Dan used Freeform’s tools to compare and analyze the new model data to the original scan data to try and establish the best accuracy possible.

Once he had a model that conformed to all the critical dimensions of the gear, Dan saved it directly to STL and printed it out in a variety of materials and 3D printing technologies to test for strength and rigidity. After many tests, the part that ended up proving to be the strongest and most comparable was an ABS plastic part printed using 3D Systems very own entry-level 3D printer.

“I was extremely anxious to see if the 4-wheel drive would engage with the 3D printed part installed in the actuator. I knew that the outside of the part looked and felt almost exactly like the original but wouldn’t know if it worked till the part was installed and we tried to engage the 4-wheel drive.”

Dan installed the gear, rebuilt the front actuator, and installed it back into his truck. The part worked perfectly!

“I was really quite surprised at first. I really couldn’t believe that the 3D printed part worked and I had my 4-wheel drive back up and working again without having to spend a thousand dollars or more.”  Dan created the part in less than a few days and printed it in less than hour.  He was back up and driving through the snow covered hills of Colorado with a little help from 3D printing!

(Image 2 above left: the finished design from 3D scan data in Geomagic Freeform)

(Image 3 below: After testing several types of 3D print the part printed in ABS from the Cube 3D printer was installed)