The China Academy of Art with its 7000 students on three separate campuses is one of the most prestigious fine arts institutions in China.  It offers Ph.D., Master’s and Bachelor’s degrees in such specialties as design, architecture, multi-media and film studies.  The Academy, because it focuses on human care and social needs is also the only Chinese art education college recognized by The United Nations Educational, Scientific and Cultural Organization UNESCO.

The Sculpture Department was faced with particular struggles when they set out to create a statue of Chairman Mao. Huang Ping, a teacher at the Institute wanted to present this statue in Xiangtan, Hunan Province, the home town of Chairman Mao. In the past, the final representations were created from original design papers with the hopes that the scale and proportions would be correct. This proved to be quite time consuming, the result of which was dependent on the artist’s interpretation and skill level.  Even more complicating factors were the weather and limitations of the working space.  These impediments led to a painstaking process with no assurance of aesthetics or accuracy.

They decided that their answer was in the use of 3D technology. 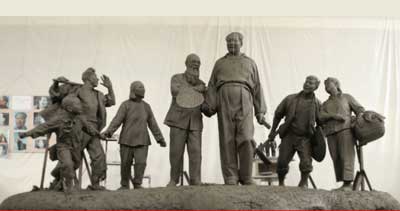 1. First, in an inside workspace a mud draft was created, the size of which was much smaller than the proposed final one. (Figure 1)

2. The draft was then scanned using a Minolta scanner (Figure 2). 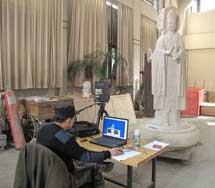 Huang had used Geomagic Wrap for more than eight years and was proficient in creating a representative polygon model.  Hole filling, of which Huang was particularly pleased, and polygon repair were utilized among others to edit the digital model.  Because the audience of the statue would be standing and looking up at it, the creators had to consider this view, making adjustments in the digital models such as widening the head and shoulders (Figure 3). 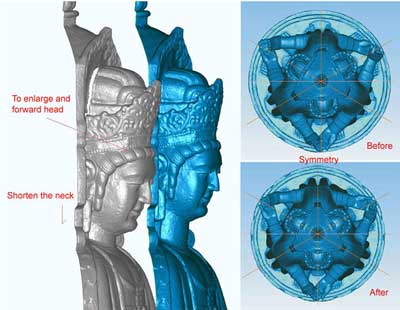 3. Then the .stl file was exported to a rapid prototype facility where it was printed to size then combined together into one piece (Figure 4). 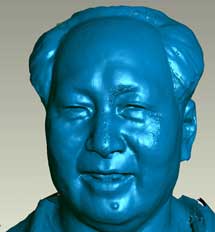 The entire process ensured not only the detail of each part but the overall proportion of the sculpture.  Geomagic Wrap enabled a large reduction in working time and ensured the accuracy of the final piece.  Huang hoped that based on these results Geomagic Wrap could be used in a wider range of applications within the field.  LongXiang, the Dean of sculpture Institute said "Software like Geomagic Wrap is a convenient platform for us to work in the creation. It builds a stage." 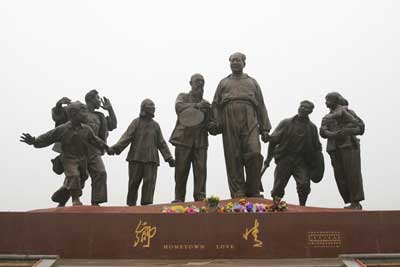 The final statue shows Chairman Mao with his childhood, private school teacher on his right side, his left hand holding a newspaper.  Mao is surrounded by several towns’ people, villagers and several school children rushing to greet him.  The sculpture is a beautiful piece and has become a local landmark in XiangTan (Figure 5).