3D printer delivers color, volume and quality to enable Starburns to create “thousands upon thousands” of faces for stop-motion puppets.

“Sad,” “beautiful,” “witty,” “every character fascinating and boldly realized”: These are not words one typically associates with a stop-motion film starring puppets.

But, then again, the film Anomalisa is something that’s not been seen before.

The range of expressive humanity achieved in the film was made possible by the high-resolution 3D color printing of the 3D Systems ProJet® CJP 660 system. Starburns Industries, a full-service production company based in Burbank, California, used the 3D printer to turn out thousands of different faces with life-like details such as wrinkles, smiles, frowns, worry lines and bags under the eyes.

Aesthetic Value Meets Productivity
Over the last few years, 3D printing has become commonplace in the movie industry for applications such as prototyping, prop making and creating objects that are difficult to construct in traditional ways. But, in the sheer volume of parts and in the emotional realm in which it is used, Anomalisa sets new precedents for 3D printing in entertainment.

Duke Johnson, co-director of Anomalisa, along with Charlie Kaufman (Being John Malkovich, Eternal Sunshine of the Spotless Mind), cited 3D printing for helping to establish the inner feelings of the characters and providing a higher level of detail.
But for all the aesthetic value that the ProJet CJP 660 helped bring to the characters, the use of this particular 3D printer came down primarily to productivity: the system is fast, reliable and generates life-like color. 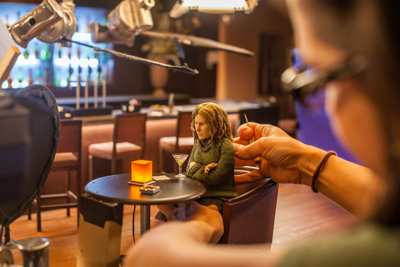 The ProJet CJP 660 outputs full-color 3D prints in one run without having to change palettes. Its build area of 254 x 381 x 203 mm (10 x 15 x 8 inches) enabled Starburns to turn out dozens of faces with different expressions in a single run within hours.
“Color is the most important attribute for us, along with speed and the volume the machine can produce,” says Bryan LaFata, Operations Supervisor at Starburns Industries. “We were running the ProJet almost non-stop for a year and a half during Anomalisa production, creating thousands upon thousands of faces.”

Thousands of Expressions
Starburns modeled and printed three basic head designs for Anomalisa: One each for the lead characters Michael and Lisa, and another for what is called the “world face,” a composite face modeled from 20 or more Starburns employees. The world face was used for every character except Michael and Lisa. 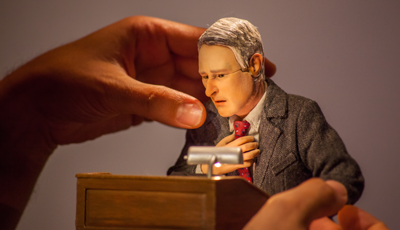 The faces for the characters include an upper and lower faceplate. Thousands of expressions were modeled and printed by Starburns for the characters. This gave animators access to nearly every possible expression for a given scene.
“We produced racks full of faces so they could be switched out at any time,” says LaFata. “It could take multiple facial models just to get the right smile.”

Retaining the Look and Feel
A conscious choice was made by the Anomalisa directors to keep the lines between the upper and lower faces in place without digital airbrushing.

James A. Fino, Executive Producer and Partner at Starburns, explains this decision in an article on the Producer’s Guild of America website: “Recent stop-motion animated features typically erase those lines digitally, but that was not our choice for Anomalisa. Rather than a distracting element, the seams serve as subtle and persistent signs of the incredible artistry on display in the film.”

In a New York Times article by Mekado Murphy, co-director Kaufman explained it this way: “We didn’t want to hide the fact that it’s stop-motion. We didn’t want to paint out the thing that it was...we wanted that feeling of the unseen presence of the animators.”

Starburns also did minimum post-processing of the characters’ faces, retaining the look and feel that came directly from the ProJet 660. Again, this was the directors’ preference.

“We used [3D printing] for a very specific purpose with the realism that they wanted in the faces, and the textures and the differences in color would not have been possible by hand-painting,” says Caroline Kastelic, Starburns Puppet Supervisor, in an IndieWire interview. “And that’s why they have that nice texture on them...I find that aesthetically brilliant and it also saved us a lot of time.”

Local Support
Creating the thousands of faces, dozens of body models, and the realistic sets for a production such as Anomalisa takes teamwork; not just among the nearly 200 people at Starburns, but by outside partners as well.

LaFata gives credit to 3D Rapid Prototyping, a 3D Systems partner based in nearby Garden Grove, California, for keeping Starburns supplied with materials and even printing face models when needed.

“We were pushing out a lot of faces, often 24/7, and Bill Craig [3D Rapid Prototyping President/CFO] and his team were always there to help us out,” he says. 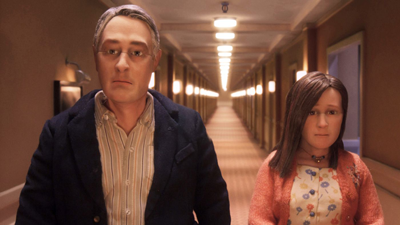 Big Future for 3D Printing
No matter how fascinating the behind-the-scenes technology is for a film, the ultimate measure of success is how the story is delivered. In the case of Anomalisa, 3D printing is not just a special effect or quirky conversation piece; it is integral to the way the characters perform.

The approach seemed to have struck a chord: Beyond Oscar and Golden Globe nominations, Anomalisa was the first animated film to win the Grand Jury Prize at the 72nd Venice International Film Festival. In his five-star review in Rolling Stone magazine, Peter Travers calls Anomalisa a “stop-motion masterpiece.”

“The scale and speed at which you can produce full-color models on a machine such as the ProJet CJP 660 is definitely a major benefit,” he says.

“I think 3D printing has a big future for stop-motion films.”