Much can be learned about societies by studying their vessels, both the utilitarian pieces used for day-to-day tasks such as drinking, cooking and storage, and those that represent art.

At Stephen F. Austin State University in Nacogdoches, Texas, researchers in the Center for Regional Heritage Research (CRHR) are using ceramic vessel studies to learn more about a culture close to home: The Caddo Nation, a group of southeastern U.S. Native American tribes who lived primarily in what is now east Texas, northern Louisiana, southern Arkansas and Oklahoma. The Caddo Nation is currently headquartered in Binger, Oklahoma.

One of the most valuable tools in the Caddo vessel study—spanning Caddo life from around A.D. 800 to 1700 and beyond—is 3D scanning software from 3D Systems. The CRHR study is repurposing 3D Systems software primarily used for product design (Geomagic Design X) and 3D inspection (Geomagic Verify, now called Geomagic Control).

A window into past lives

"Having the capacity to create reference geometry—planes, splines, vectors—for each vessel, then populate that geometry with reference points is key to our work," says Dr. Robert Z. Selden, Jr., the CRHR research associate at Stephen F. Austin who is heading the study.

"Those data points are subsequently exported and run through a suite of statistics that help us to better understand which ceramic vessels are similar in shape and which are not. On the surface this seems like a simple task, but as the number of scanned vessels in our database continues to grow, it has become incredibly complex." 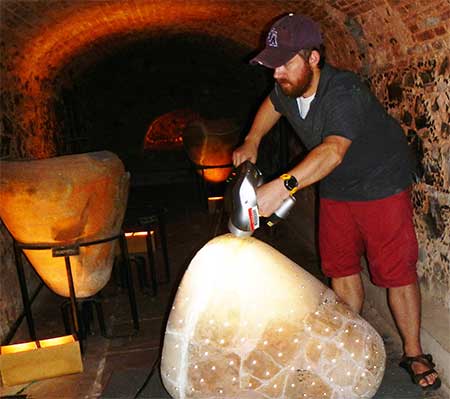 Variations in vessel size, shape and form, along with ongoing research on geographic dispersion, decorative elements, pigments and other attributes, lead to a greater understanding of Caddo ceramic design and (potential) use, which in turn opens a window into how indigenous people might have lived at a specific moment in time.

In the past, research has been limited to 2D measurements, and access to intact and fully reconstructed Caddo vessels continues to be restricted primarily to researchers. Portable 3D scanning provides a non-invasive method for CRHR researchers to digitally capture these important collections over a four-state region and store those data in 3D digital archives.

"What we are hoping to do with our project is to digitally aggregate these collections where they can be accessed by anyone with an internet connection," says Selden. "These data can then be downloaded for use in research ventures as well as the classroom."

Most of the 3D scans were captured by a ZScanner 700CX; a lightweight, portable handheld scanner that fits well with the need to travel to museums and archeological sites. The CRHR team has recently augmented the ZScanner with a Creaform Go!SCAN50, which provides full-color scanning with accuracy of up to 0.1 mm (0.004 in.) and resolution of up to 0.2 mm (0.008 in.).

Selden describes Geomagic Design X software as "the go-to software for the bulk of our needs."  The CRHR team uses the scanner direct control feature in Geomagic Design X to scan directly into software, easily transitioning from scanning, to post-processing, to data collection.

"The shift from 2D to 3D analyses, while still very new, has already made a tremendous difference," says Selden. "It is allowing us to expand our analyses and generate replicable results.”

"Using Geomagic Design X we are able to trace the decorative elements on Caddo ceramics, and view them in new ways. We are also able to collect precise measurements that were previously inaccessible."

The 3D scans processed in Geomagic Design X are populated with reference geometry and data points that are subsequently exported to a statistical package for a comparative study of vessel shape and form, called geometric morphometrics.

Geomagic Control, software typically used in industry to take precise measurements of parts and accurately compare them to digital reference data, has been used primarily to generate a geometry report for each vessel. But with the purchase of the Creaform scanner, Selden sees the software being used to document metric deviations between scanners that might affect the outcome of the study.

"Our findings suggest a broad range of variation in Caddo ceramic shape and form, pointing to an avenue of research that has not yet been fully explored," says Selden. "In our case, the metric data from the analysis of the 3D models can be augmented with qualitative data from a more traditional analysis of the ceramics, leading to an improved understanding of when and where these artifacts may have been used."

"These tools have provided a platform that we can use to generate hypotheses about Caddo prehistory that can either be confirmed or refuted with the addition of more data—in our case, more scans of Caddo ceramics. This approach also holds significant theoretical promise, as results can better inform us about the evolution of Caddo ceramic design through time, the Caddo ceramic economy, the many potential uses of these culturally valuable artifacts, and can—perhaps—help us to identify a particular group (or groups) of Caddo potters."

Try it for free!