No one really knows what the mysterious moai of Easter Island represent. These glowering volcanic rock statues, standing an average 4 m (13ft) high, weighing 14 tons, are estimated to have been erected between 1300-1600 AD. Their scowling, geometric forms are thought to depict powerful leaders during early occupation of the island. Rapa Nui, which is the name given to their land by the islanders, lies about 2300 miles west of Chile in the Southeast Pacific Ocean, and has about 1000 moai remaining. Of those, human activity and natural events have damaged and eroded the stones and most have been toppled – presumably by tsunamis.

In 2007, the Commission of Extra-European Culture of the German Archaeological Institute (director and project manager Dr. Burkhard Vogt), teamed with the geomatics experts at HafenCity University Hamburg, and started scanning some of the sites to digitally catalog them using terrestrial laser scanning, modeling into 3D meshed objects, and texture mapping. The team, which included Professor Thomas P. Kersten, Dipl.-Ing. Klaus Mechelke, and Dipl.-Ing. Maren Lindstaedt , conducted 2-4-week missions in February and March of each year between 2007 - 2011 in cooperation with Chile’s Consejo de Monumentos Nacionales, Santiago, and CONAF (Corporación Nacional Forestal). The project’s objectives were to allow further research into the island’s history as well as document and catalog the re-erected moai, and terrestrial data into a GIS system. This data would be used to measure erosion and damage of the statues in the future.

As touching the statues is strictly forbidden, this was only possible through the use of non-contact scanning. As a result, the team used a combination of Trimble, Riegl and Zoller+Froehlich (Z+F) laser scanners, supported by digital photography using Nikon SLR cameras.

Scan but do not touch

The moai were apparently carved out of the Rano Raraku quarry located near the eastern end of this 63-mile island. Nearly half of the statues are still adjacent to the quarry, but 288 were transported to sites mostly around the island’s perimeter and set up on rock stands (ahu) with their backs to the sea. 92 are still located en route from the quarry. 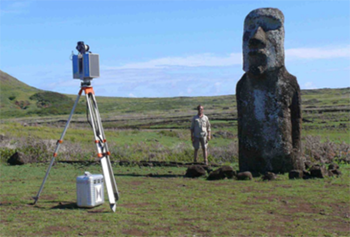 For the study eleven sites were scanned during the five field campaigns. Prior to this effort, the only available documentation of the moai had been through pictures, drawings and sketches. To perform a comprehensive analysis for erosion, the non-contact scanners mentioned above were used, since walking on the ahu or touching the moai is not permitted. Local surroundings of some moai were to be scanned while focus would be on creating exact 3D models of ten selected sculptures to analyze any deterioration process - if possible - during the span of just a few years for the study.

Using the terrestrial laser scanners, the 3D geometry was scanned and the intensity values of the laser beam and RGB values from the digital cameras were also stored for each 3D point.

To ensure complete object scanning multiple scanner stations were needed around each object to get all 360 degrees of data. In addition, physical spheres or targets were placed on marked points in the field for use in later geo-referencing and scanned from each station. The scanned spheres and targets could then be automatically recognized in the point cloud that was created. After set up, approximately 15 minutes to 1 hour per scan station was required for scanning depending on the scanner used and on the resolution specified.

In some cases physical targets were used for direct geo-referencing of each scan. This meant that at least 3 but ideally 4 targets were included in each scan. The coordinates of these targets was determined by a total station using a special red target on the back of each laser scanning target. The position of the geo-referencing was found to be within 1-5 mm, and the scan resolution was set at either high or super-high with low noise depending on the distance to the object which corresponds to a resolution of 1-5mm at the object.

Today, in total, 46 moai (98% of all re-erected statues) were already scanned by the team of HafenCity University Hamburg resulting in more than hundred GigaBytes of scan data and photos.

In the first 5 years of effort, 4 main sites were scanned at five different times – These sites include a single moai at Vaihu and Huri A Urenga which required just 4 scanning stations each to record the data; ahu Akivi – a group of 7 moai all about 4.5 m (13ft) tall and one of the few groups that has the statues facing out to sea. In addition to the statues, the ahu and the remains of two cremation chambers behind the moai were recorded at Akivi. Ko Te Riku is another single moai, located at the Tahai Ceremonial Complex which is one of the island’s important historic settlements. Due to its head covering of reddish volcanic rock, this moai could not be fully recorded using the scanners positioned on the ground.

The automatic registration of the point clouds was performed using RealWorks Survey (Trimble), LaserControl (Z+F), and RiScanPro (Riegl). Once the point clouds were registered, they were imported into Geomagic Wrap – software which processes 3D point cloud data into usable 3D models. In Geomagic the point clouds could be quickly and easily resampled for a more efficient size using the grid size, filtering of the data and removal of outliers. After this a 3D polygonal model of the sculpture is rapidly created for archive, use and analysis.

At this stage the 3d data can now be used for volume calculations, cross-sections, precise determination of geometrical elements (e.g. height and width) and visualization using texture mapping. However, these models form the main reference data for deformation analysis across coming years.

To analyze changes to the sculptures, two triangulated meshes of the sculptures are needed – one as comparison data and one as reference data. The figures were modeled at high resolution with a point grid of 5mm for the moai at Vaihu and 2mm for ahu Akivi. This level of resolution should allow for any signs of existing erosion to be clearly identified as well as allowing changes to be quickly identified.

While the experts are anticipating that erosion or weather conditions could only make changes by millimeters across a ten year period, more dramatic changes can be made through unstable ground. This can only be compared if both reference and comparison data use the same fixed coordinate system. The team recognizes that for this a precise geodetic network is required but has yet to be established.

“The massive data sets created on this project were both challenging and educational,” commented Professor Kersten. “We have developed processes for maintaining accuracy, applied software such as Geomagic that turns scan data into usable 3D, so that this valuable data can be used and reused by researchers going forward.“

While much of the damage done to the moai has been through natural disasters, today’s disasters to the stones tend to be through horses or human vandalism, as evidenced by damage to one statue of the ahu Nau Nau at Anakena that was perpetrated by a tourist in March 2008. This illustrates that it is absolutely essential to scan the moai for documentation and to have 3D digital copies of the moai on hand. While scanning will continue in the next years, the scanning and documentation of all registered 887 moai could take quite a long time. However, image-based recording systems in combination with dense image matching algorithms offer the best low-cost, flexible and efficient solution for rapid 3D documentation of these statues.

In summary, Prof. Kersten said, “The entire project, the satisfaction of getting reliable 3D data of the moai, was a great success and has helped us define world-class techniques for accurately archiving rare heritage sites. This data can be used for analysis and archive, ensuring that we preserve the valuable sites created by past civilizations.”

Image above: Comparisons between old and newer scans created in Geomagic allow researchers to understand where erosion occurs.

Get a free trial now!