From Peter Fonda in Easy Rider to buttoned-down executives seeking weekend thrills, Harley-Davidson motorcycles are an American icon, with a design aesthetic recognizable anywhere in the world.

The design of a Harley is so intricate that the models for many of its parts are sculpted with clay, wood or fiberglass to simulate the soft curves of the bike. Capturing the exact look and feel within traditional 3D CAD systems is difficult at best. As a result, integrating the handcrafted components into a modern CAD-engineered bike can be a time-consuming and expensive process of trial and error.

A new process, however, has the potential to significantly improve the way Harley-Davidson captures and duplicates legacy parts. Using Geomagic Wrap software from Geomagic (Research Triangle Park, N.C.), a Harley engineering consultant digitally duplicated a legendary Harley gas tank, increasing the speed and accuracy of the 3D modeling process, and enabling the company to create a digital inventory of the part.

For most vehicles, a gas tank is simply utilitarian. Not so for the Harley-Davidson Dyna Wide Glide. The tear-drop-shaped gas tank is one of the most integral parts of the Dyna Wide Glide, designed 20 years ago by Willie G. Davidson as the first "factory chopper" motorcycle. The Dyna Wide tank was originally sculpted in wood because its soft-curving shapes were too difficult to reproduce accurately in CAD software.

A few years back, Harley-Davidson Engineering turned to Mark Schaefer of Advanced Design Concepts (ADC), a 3D modeling and CAD service bureau, to create computer surface models for the deceptively complex gas tank. Surface models would allow Harley-Davidson to integrate design and production of the gas tank with the rest of its CAD processes.

"We were familiar with the difficulty of this task," says Schaefer, who started out using commercial surface modeling software. "Styling is what drives Harley-Davidson's designs. Most of their styled models begin as clay models that need to be converted into CAD models for engineering design and manufacturing."

ADC's early surfacing efforts helped streamline the gas tank production process, but it was still tedious work to get the models within the accuracy range required by Harley-Davidson. It wasn't until turning to Geomagic Wrap that ADC was able to deliver a solution that has the potential to deliver the CAD integration, accuracy and flexibility that Harley-Davidson has been seeking for its legacy parts. 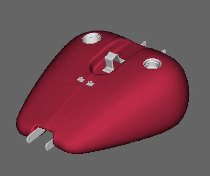 The process started with Harley-Davidson sending Schaefer an assembly-ready Dyna Wide gas tank. It took two days of work to prepare the tank and scan it with an ATOS white-light 3D scanner. The 3D point cloud data was brought into Geomagic Wrap, converted to a polygonal model, then a NURBS model, and exported as a watertight, manufacturable IGES surface. This process took a few hours, compared to three or four days with ADC's previous surfacing tool.

In the final step, Pro/ENGINEER was used to add parametric features such as mounting brackets to the model. The entire process was completed within four days. The surface accuracy of the model came within 0.003-inch of the original gas tank. "In the past, I had to work pretty hard to get models in the 0.010- to 0.015-inch range," Schaefer says.

Digital inventory of parts opens up enticing possibilities for manufacturing companies such as Harley-Davidson. The 3D data can be used to spin off different designs, products and applications with no duplication of effort. Substantial cost savings can be realized by having conceptual work, fit testing, and iterative redesign done on a computer. Replacement parts can be manufactured as needed, saving on warehousing costs, and avoiding the risk of damage and deterioration of aging legacy parts.

Perhaps the most exciting part of a digital inventory is the potential for companies to mass customize to the point where each product is as unique as the person who buys it. This would allow companies such as Harley-Davidson to provide customers with their latest products in an almost unlimited range of colors and styles.

Imagine all types of Harley enthusiasts – from the rebel to the weekend warrior – being able to select a Harley that perfectly fits their personality.