Kids Love STEM - (and they don't even know it)

A few weeks ago I had a chance to do one of things I love most about my job - showing students exactly how cool technology can be with a hands-on demonstration of Geomagic capture/modify/interact/make technologies. Geomagic was a participant at the Brassfield Elementary, N.C.,"Math & Science Fair" - and we were lucky to have a willing participant in the Principal for Brassfield Elementary, Ms. Elizabeth McWilliams. 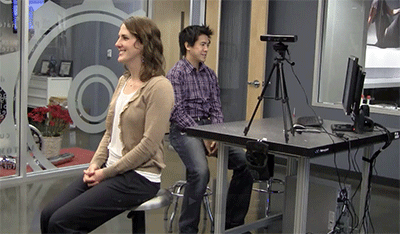 In preparation for the evening of fun at Brassfield, Ms. McWilliams came to the Geomagic HQ so that we could scan her with a Kinect and then create a 3D model of her. One of the great team members here, Richard Lam, took that model (which given that it was captured using a $150 Kinect as a scanner is flat out amazing quality) and designed something surprising. Since we had already done Pez dispensers and mini-bobble heads we had to amp it up a bit.

On the day of the show we brought our Microsoft Kinect to act as a scanner, a Geomagic FreeForm setup which Richard Sandham handled, and a 3D Systems Cube printer. We loaded the model of Ms. McWilliams into FreeForm so that the students could experience haptic interaction with the digital model of their Principal. Of course that made for a very fun time indeed! 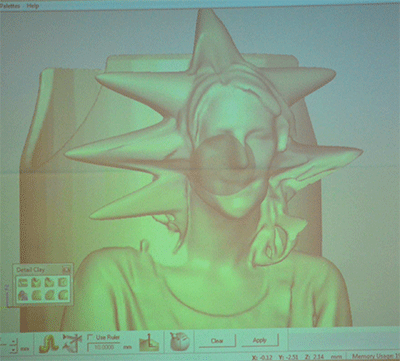 (Image above: What kids do when enabled to manipulate their principal's 3D data.)

We then had the unveiling of the model of Ms. McWilliams. We took her scan and printed a model that held a coffee mug inside of it - so that she could drink out of her own head! The kids loved that indeed. . . 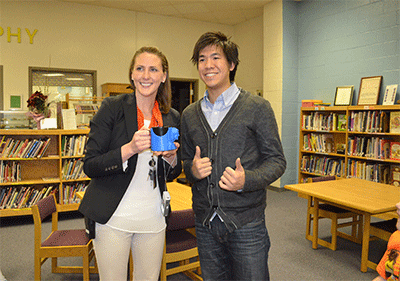 I love watching kids explore our technology. Kids don't think about what can't be done, they think about all the things that can be done. We can all learn from that. If I could harness the unbridled optimism and excitement that these kids showed into my daily life, I would be a better person for it.

I also noticed something very curious about the makeup of the students that were involved with the demonstrations. There were more girls participating than boys. We should ask ourselves why as a society many of these budding young female scientists, mathematicians and engineers seem to get filtered out before they pick a career. (While out of the scope of this blog, some statistics from the United States Department of Commerce are telling: While there is relative parity among men and women for all job types, STEM-related jobs are held roughly by men and by women, and even for those STEM jobs, women are paid less than their male counterparts. See: http://www.esa.doc.gov/Blog/2011/08/03/stem-where-are-women)

If you are a relatively frequent reader of my blogs, you know that I believe STEM in the classroom is incredibly important. Our time at Brassfield is one small part of what needs to be a broader plan to engage with students in the classroom. Not only do I believe it is the right thing to do (from a US competitiveness standpoint, etc.) it is a commercial imperative for Geomagic! 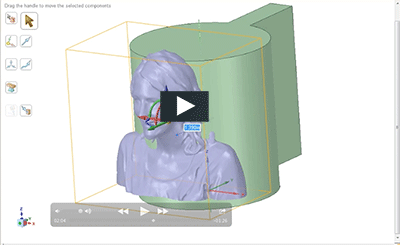 View the video of how the 3D Cup wrap was made

So how might the use of 3D capture, interaction and printing technologies help push the STEM agenda within classrooms? As they say, a picture is worth a thousand words - see a great infographic below explaining how 3D printing could be used in the classroom to help promote STEM. While there a few mistakes in it, it generally does a good job of showing how these tools can be used to excite kids about technology in their classrooms. As our time at Brassfield (and other schools) shows, kids"get it" when it comes to these tools, in ways that even their parents sometimes have a hard time understanding.

Infographic. Source: How 3D Printing Will Revolutionize the Classroom (click image or the link to see a bigger version of this)