New York artist Robert Lazzarini has made a name for himself through his transformational sculpture work, taking common objects and pulling them through compound distortions to create a new type of viewing space. Lazzarini’s work is characterized by its lack of an optimal vantage point, whereby he forces his audience to circle and inspect his work.

With prior installations at New York’s Whitney Museum and solo exhibitions at the Mint Museum and Davidson College, Lazzarini was recently working as an artist-in-residence at the McColl Center for Art and Innovation in Charlotte, North Carolina, and is exploring 3D printing technology via 3D Systems’ nearby headquarters.

We were able to connect with Lazzarini to talk about his interest and use of the technology.

When did you first get into 3D printing?

I started using rapid prototyping around 1995 for a group of sculptures that were based on objects in my studio.  The very first models that I made used a technology called Laminated Object Manufacturing.  When I started the series skulls shortly after that, I began using 3D printing (stereolithography) which offered a much better resolution.

What drew you to the tech?

My sculptures are compound mathematical distortions based on objects that already exist in the world.  The most efficient way to manipulate geometries is digitally.  Because I was already working with digital files, it made sense to output those files into physical format using 3D printing.  It was a very quick way to make subtle changes to the geometries of objects and see them in physical form.

I understand you’ve been exploring desktop 3D printing through the use of the CubePro. Can you tell me about that experience?

I was recently in Charlotte, NC, as a Knight Foundation Artist in Residence at McColl Center for Art and Innovation.  Part of my residency was to create maquettes for a sculpture I’m currently working on.  3D Systems was very generous in letting me have use of the CubePro during my stay.  It was an ideal printer for making large models quickly with excellent resolution.  I used the ABS plastic for its durability and spray my models with a gray sandable primer, which on the ABS, finished nicely.  The operation of CubePro was extremely intuitive and the advantages of having one in my studio were substantial.  I was able to make changes to my models and print them immediately without waiting for a service bureau.  This was a significant time saver and allowed me to speed up the initial design phase of my project.

How does 3D printing fit in with your other work?

3D printing is an integral part of my sculptural process, which includes digital, industrial and hand-made processes.  I use it predominantly to create production and design models.  More recently I’ve been using rapid tooling (Direct Metal Laser Sintering) for final parts within certain sculptures.

What does 3D printing contribute to your art specifically? What do you think it stands to offer to the arts more generally?

For my work, 3D printing offers the ability to manipulate the fabric of the world and to quickly visualize it.  So as part of the design process, it is unrivaled.  With the possibility of creating parts that I can use in final sculptures, rapid tooling allows me to supersede industrial methodologies that may be cost prohibitive or in some cases may not even be capable of making a specific part.

As it applies to the visual arts, I think the possibilities are pretty boundless.  As more artists make the shift to creating things virtually, having a 3D printer in the studio will be as commonplace as having a photo-based printer.  I’m sure artists will find ways to incorporate 3D printing within their practice that would be hard to even imagine at the moment. 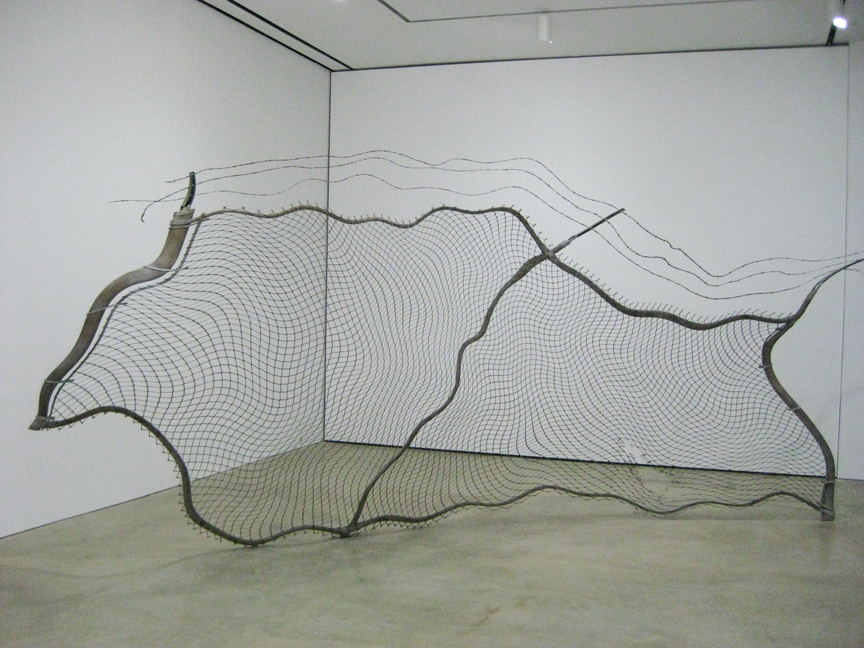 I recently collaborated with 3D Systems on my most ambitious work to date, chain-link fence (torn).  It was a complex sculpture made from over 300 QuickCast Patterns that were cast in steel, finished and assembled.  Casting the parts using QuickCast Patterns was the only viable way to make this particular sculpture.  I’m currently working on designs for several larger sculptures.  One of them will also use QuickCast Patterns.  It will be a large public bronze sculpture based on Lee Lawrie’s 1937 Atlas.  In addition, I’m working on two sculptures based on a pair of marble Attic funerary lions from the 1st century BC.  Part of the process will be to make two full scale models of each of the lions.  With its large build volume, the 3D Systems’ ProX 950 would be ideal.

From Lazzarini’s work and the other artistic innovations we’ve had the privilege to witness as a company, we are excited about 3D printing’s budding role in the arts, and are hopeful alongside Lazzarini that this technology will play an active role in contributing to our collective visual culture.

For more on Robert’s work, please visit his website.