Geomagic software has been used for everything from helping to ensure safety of the NASA space shuttle to making personally fitted devices that remove the stigma of hearing aids.  But perhaps the most life-affirming application of Geomagic software has come out of an engineer-physician team working at Shriners Hospital for Children in Springfield, Massachusetts.

The engineer, Beth Roscoe, and the physician, Dr. Philip Stoddard, are using Geomagic software to bring smiles to children’s faces, and by extension, the faces of their families.  With the help of 3D scanning technologies, Roscoe and Stoddard have developed a new treatment for severe cleft lip and palate that reduces the cleft width before surgery without inhibiting upper-jaw growth.

Like many breakthroughs, this one came through a combination of vision, innovation, great technology and a fair amount of luck.  The good fortune came from a chance encounter in a hospital cafeteria, and the friends Stoddard has made through his hobby flying glider planes.

Searching for a better way

The search for a new treatment began a few years ago after Stoddard returned from a workshop on Naso-Alveolar Molding (NAM) – one of the two major pre-surgical treatment methods for babies born with severe cleft lip and palate.  NAM is labor-intensive and requires a dental lab and on-site orthodontic staff.  Results can vary depending on the skill of the orthodontist administering the treatment.

The other treatment method, DentoMaxillary Appliance (DMA), also has drawbacks.  It is invasive, requiring surgical pinning of an appliance to the roof of the mouth under anesthesia, and daily screw tightening by caretakers.  Some physicians think it might also impede jaw growth.

Stoddard thought there must be a better way.  He believed that computers might be the key to better pre-surgical treatment for wide cleft lip and palate, but he didn’t know about the technology to make it happen.  That’s when a first bit of serendipity took place.

Stoddard was having lunch in the Shriners Hospital cafeteria when he had a chance meeting with Roscoe, who at the time was a resident in prosthetics.   During the course of their conversation, Stoddard learned that Roscoe was previously a software engineer who developed CAD systems.

A light bulb went on in Stoddard’s head.  Could Roscoe develop a proposal for using CAD/CAM for pre-surgical treatment of cleft lip and palate?

Roscoe was up for the challenge, and from the beginning her approach was very similar to the final methodology.

The document she wrote proposed scanning a plaster model of a patient’s cleft palate to obtain 3D shape data, modeling a corrected cleft, interpolating between the model of the patient at the beginning and the end of the treatment to reduce cleft width while accommodating growth, and then producing the series of treatment appliances with a rapid manufacturing system.

The concept of a series of different devices to accommodate growth and the closing of the cleft gap was an inspired idea.

“The serial appliance approach was a way to circumvent the need to modify a single appliance every week,” says Roscoe.  “Each appliance in the series would represent the manual modification used in the other methods.  I knew it wasn’t an A-to-B linear path of treatment.  The appliances needed to morph to accommodate changes in size, shape and even configuration.”

The right tool at the right time

With the procedure outlined, the main question was the software that would be used for 3D modeling.  Roscoe thought she might have to use the scan data as a reference and create the CAD model from scratch.

She gave the proposal to Stoddard, who planned to run it by Peter Fuss – an electrical engineer, fellow glider enthusiast and friend – during an upcoming ski vacation.  Stoddard didn’t know at the time that Fuss was on the Geomagic board of directors.

When Stoddard showed him the proposal, Fuss thought that Geomagic would be the ideal software for the process.  When he returned from vacation, Fuss made arrangements for Roscoe to obtain Geomagic Wrap software, and she began learning how to use it.

“I didn’t have any formal training,” says Roscoe.  “I muscled through and got a good command of the software on my own, with the help of some online tutorials from Geomagic.”

Roscoe’s initiation with Geomagic confirmed what Fuss had suspected.

“Geomagic was the perfect solution to our very specific need – to be able to create and easily manipulate detailed 3D models from point clouds,” says Roscoe.  “It enables us to produce highly accurate appliances that provide a custom-fit for each baby, and a means of specifying each patient’s unique 3D prescription.”

Putting it all together

The final piece of the puzzle – how to manufacture the series of individualized appliances – involves Bob Morehardt, another of Stoddard’s technology-minded glider friends.

Although Stoddard didn’t know it when they first met, Morehardt is owner of RMB Tool (formerly Mor-Tech), the first rapid prototyping service bureau in the Northeast United States to use selective laser sintering (SLS) systems.  When Roscoe found out about Morehardt, she thought he might be able to provide the manufacturing part of the solution.

Roscoe and Stoddard met with Morehardt and came away confident that they could use RMB Tool’s SLS systems from 3D Systems to create the dozen or more appliances needed to serially mold a patient’s gums into a more normal position, while allowing the palate to grow naturally.

After outlining the treatment methodology and determining the technology tools, it was time to put the new regimen to the test.  This required permission from the Institutional Review Board (IRB), the medical equivalent of the Federal Aviation Administration (FAA).

The proof is in the smile 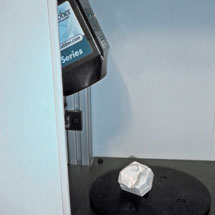 Having taken casts of the cleft palate, it is then scanned into 3D for use in Geomagic Wrap 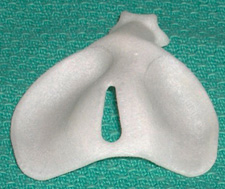 Once the 3D data is in Geomagic Wrap, multiple appliances can be quickly generated  and then printed in 3D 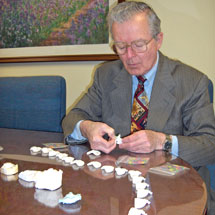 Dr. Stoddard arranges all the appliances to be used on one patient. Each appliance minutely pulls the cleft lip and palate back together in a painless manner 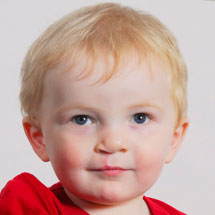 After the cleft lip and palate are pulled back together, minor plastic surgery allows the lip to be almost invisibly repaired