Knee replacement surgery is performed on more than 250,000 Americans annually, yet less technology is brought to bear on this issue than on the development of common household appliances.

“More engineering analysis goes into the washing machine in your home than into the artificial knee joints implanted in people,” says Dr. B.J. Fregly, assistant professor in the Department of Mechanical and Aerospace Engineering (MAE) at the University of Florida.

Fregly is out to change that scenario, taking technologies traditionally used for virtual prototyping of mechanical systems and extending them to more complex and variable biomechanical systems. His toolbox for studying and predicting joint contact stresses and motions in artificial and natural knees includes dynamic modeling and simulation, parallel processing, image processing of CT and MRI data, 3D reverse engineering from medical imaging data, video-based motion capture, and fluoroscopic imaging. 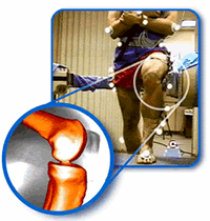 To utilize all these technologies, Fregly is collaborating with Drs. Greg Sawyer and Rafi Haftka of the university’s MAE department, and Dr. Scott Banks of the Biomotion Foundation in West Palm Beach, FL. Though the study is still in the early stages, Fregly and his team believe that a greater understanding of the factors that contribute to joint failure will lead to longer-lasting artificial knee designs and better surgical procedures.

Wear and Tear on Baby Boomers

Total knee replacement (TKR) is a common remedy for the painful and debilitating effects of knee joint osteoarthritis, a condition which occurs when the cartilage covering the ends of the tibia (shin bone) and femur (thigh bone) begins to degenerate. In TKR surgery, the cartilage bearing surfaces of the tibia and femur are replaced with artificial surfaces. The femur is fitted with a metallic bearing surface, and the tibia is fitted with a metallic base plate into which a plastic insert is snapped. While TKR usually restores some mobility, problems related to wear of the plastic insert typically limit implant life span to roughly 20 years - possibly less for more active patients.

As younger, more active patients are diagnosed with knee joint osteoarthritis, the restricted life span and functional limitations of artificial knees are becoming an increasing concern for the medical community. Adding to the problem are high complication rates for repeat surgery. If revision TKR surgery fails, alternatives include joint fusion, which does not permit the knee to bend, or amputation and fitting with a prosthesis.

One of the immediate goals of the University of Florida study is to identify specific knee implant design or surgical positioning issues that contribute to the wear, and ultimately the failure, of artificial knees. Researchers typically evaluate wear in new implant designs using knee simulator machines. While these machines can test several implants of the same design simultaneously, there are several drawbacks to this approach.

First, a single series of tests can cost tens of thousands of dollars and take months to run. Additionally, loads experienced by the implant in the body cannot be measured experimentally. Because it is unclear what loads should be applied to the implant, test machines do not reliably reproduce wear patterns observed in real-world situations. Worse yet, identical implants tested in the same machine often produce different wear results, making it difficult to predict how the implants will function in patients.

Fregly believes that a computational wear model will help scientists understand and accurately predict joint wear and failure. “Our goal is to create detailed models of artificial and natural knees to study the wear these joints experience under real-life loading conditions,” he says. “Instead of evaluating artificial knee designs using wear-test machines, we’ll develop patient-specific computer models that will help us study which implant and surgical positioning work best for each patient.”

Fregly’s approach evaluates and tests artificial knee designs by simulating a real-world environment specific to each patient. His team begins the process by using video-based motion capture to record gross movement data. Reflective markers are placed on the patients’ skin and clothing during treadmill walking and stair-rise activities, and the movement data is captured on a computer. The motion capture system gives a good quantitative picture of overall movement, but its accuracy can be adversely affected by movement of skin and clothing. 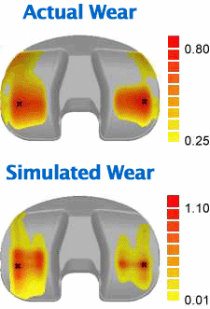 A comparison of the actual knee implant wear with the simulated wear predicted by the computer model. The actual wear was measured from two aligned laser scans, one of the worn tibial insert and the other of an unworn insert of the same size. The team visualized the simulated wear by creating worn surface geometry in Geomagic Wrap (based on outputs from the computer simulation) and then superimposing the data on the unworn geometry in Geomagic Control.

For more accurate measurements of knee joint motion, Dr. Scott Banks uses a dynamic X-ray procedure called fluoroscopy. When studying artificial knees, Banks obtains CAD models of the implant components from the manufacturer. He then uses custom software to match the 3D CAD models to each 2D fluoroscopic image as though he were orienting an object to a photograph of its shadow.

Since the CAD models have embedded coordinate systems, the image-matched components are used to quantify the 3D motion of the patient’s knee under real-life loading conditions, such as walking and climbing stairs.

The process for studying natural knees is more difficult since CAD models of the bones are not readily available. To create models of natural knees, Fregly’s team uses CT scans, which produce static 2D image slices from the top to the bottom of a patient’s leg. The CT data are then imported into sliceOmatic image-processing software from TomoVision, where a 3D point cloud model is created by stacking the 2D axial images of patients’ legs.

When studying natural knees with fluoroscopy, the problem becomes how to turn the point cloud data obtained from sliceOmatic into accurate 3D models of the bone surfaces. Banks requires highly detailed surface models - the more precise the surface representation, the better the fluoroscopic image-matching results.

“We need to go beyond point cloud data and develop accurate representations of the curves and contours inherent in an organic, biological surface,” says Fregly. “Most off-the-shelf engineering tools are not adequate for this purpose.”

This is where 3D photography, the process of capturing a physical object and automatically processing it as an accurate digital model, comes in. Fregly’s team uses Geomagic Wrap software from 3D Systems to create detailed polygonal models from the point cloud data. These models use small triangles to create surface representations that are ideal for shape-related tasks such as image matching.

Fregly uses Geomagic Wrap’s curvature-based hole-filling to extrapolate missing surface data at the ends of the bones caused by the finite slice thickness that is inherent in medical imaging data. Next he uses a curvature-based decimation algorithm to reduce the number of polygons required to accurately represent each biological surface. The final decimated model can then be compared to the original point cloud data using Geomagic Wrap’s tolerance functionality to determine the accuracy of the polygonal surface fit.

Fregly also uses Geomagic Wrap to convert polygonal surface models, which are adequate for image matching, into the mathematical surface models necessary for contact stress analysis. Such models use a “quilt” of rectangular surface patches to create a mathematical representation of the geometry. Since the “seams” between the surface patches can complicate contact analyses, Fregly uses the software to merge all patches on a contact surface into a single patch. The same process is used to “resurface” CAD models of artificial knees for contact analysis. Any deviation between the polygonal model and the final mathematical surface representation can again be determined with Geomagic Wrap’s tolerance functionality.

Once the researchers have developed contact stress predictions from the movement data, the final comprehensive wear model is created with help from Dr. Greg Sawyer, a University of Florida friction and wear specialist. Combining accurate knee motion data with contact stress predictions creates a wear model that pinpoints the exact places where an artificial knee is likely to fail.

Researchers have been able to compare the simulated wear predicted by an early version of a computational model with the actual wear of an artificial knee recovered from a patient. Their computational model’s prediction came within three-tenths of a millimeter of the actual maximum wear depth and accurately predicted the locations of the worst wear. 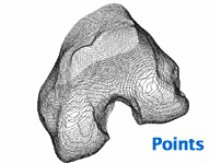 Geomagic Wrap is used to create a detailed polygonal model from the point cloud data. 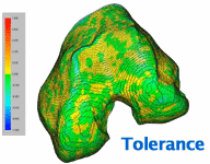 The polygonal surface deviates from the point cloud model by no more than 0.2 millimeters. 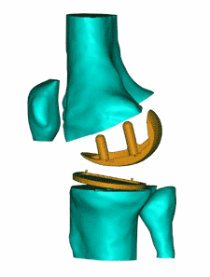