Derby the dog was born with a congenital disease that caused a malformation in his front paws. More like flippers than feet, Derby’s condition made it difficult for him to get around, but true to the effervescent spirit of a puppy, Derby demonstrated heart-breaking determination to move and play. Though he managed decently enough in soft, indoor environments, hard outdoor surfaces were out of the question. So how is it that Derby can now run and frolic with abandon?  Why, with his custom-3D printed prosthetics, of course! 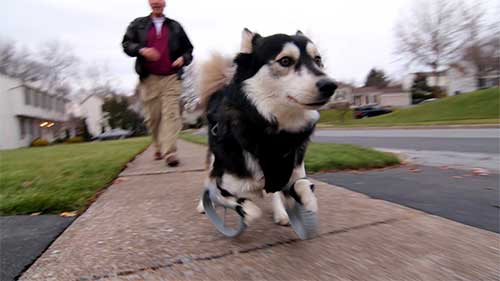 Tara Anderson is an animal-lover with a record of dog rescue. She counts two rescue dogs as permanent family members, and has fostered countless others. When Tara heard of Derby’s struggle for mobility and need for a family, Derby had her heartstrings in a knot. She volunteered to foster Derby through Peace & Paws, a rescue center in Hillsborough, NH, and worked with them to outfit Derby with a wheel cart to help him get from place to place. “It was a good solution for him to move in straight lines, but overall it wasn’t super maneuverable, and he still couldn't play with the other dogs or play fetch like he wanted to,” Tara said. “We needed something better."

Tara was struck with inspiration. As an employee of 3D Systems, she knew the capability of 3D printing technology and decided to ask experts at the office if they would help. After a resounding yes, Tara also enlisted the help of Derrick Campana, an expert dog orthotist at Animal Ortho Care in Chantilly, VA.

Derrick and the 3DS team worked together to create a workable design. They created cups to hold Derby’s front legs, first manually with carved plaster casts and then digitally, with the Geomagic Capture 3D scanner. The 3D contour model was imported into Geomagic Freeform to design the prosthetic legs and then digitally matched up with CT scan data of Derby’s anatomy. By the time this had all been orchestrated, Derby had transferred to fully adoptive owners who were invested in the project and keen to see if prosthetics would work.

Disappointingly, the first ‘peg leg’ design was a disaster. “Derby didn't understand them and had trouble balancing on them," Tara said. "They didn’t reflect the kind of flexibility of motion he needed, so it was back to the drawing board."

As Director of ColorJet Printing (CJP) Product Management at 3D Systems, Tara has a strong background in 3d printing as well as in architecture, and after the first failed testing of Derby’s prototype prosthetics, she went home and started a new product design. "I could tell from watching him struggle that he would be better served by a different design, and it occurred to me that a spoke-and-rocker design would reflect and respond to Derby’s developed method of getting around.” Once she had the idea, Tara went home and sketched it up. 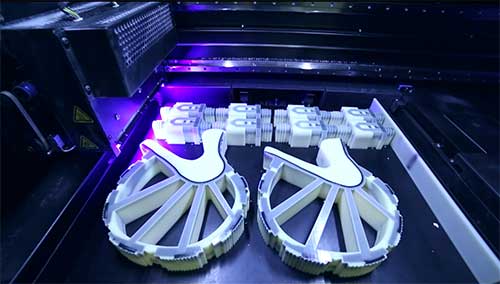 She took her newly conceived design to her colleague at 3DS the next morning, and a few days later the new prosthetics were printed on the ProJet 5500X, a multi-material 3D printer from 3D Systems.

"They were an immediate success," Tara said. "As soon we fitted them on Derby, he took off running. It was incredible. I can’t describe how gratifying it was to see him finally get to move like he’d always wanted to.”

"I'm not easy to impress, but these legs got me. Derby was immediately on the move and now he runs 2 to 3 miles daily, usually faster than my wife and me. It’s amazing."

Though the second round of prosthetics was a success, further iterations are still being tested with a higher ratio of rubber materials for better grip and comfort.

"That’s the beauty of 3D printing," Tara said. "We don’t have to wait for tooling, we can just adjust the design and reprint it for use. From my perspective, Derby’s case is what 3D printing is all about. We’re taking a critical need, developing ideas for a solution, and taking advantage of what 3D printing has to offer to make those ideas happen. It’s changing the world, one paw at a time."

Watch the video below to see Derby wear in his new legs.