Paleontology is a branch of study that is as fascinating as it is frustrating. For example, imagine unearthing an unknown species of dinosaur, only to find the left half of the creature. What does one do? In the age of the digital thread, that conundrum is more easily resolved than you might imagine, through the capabilities offered by 3D scanning and 3D printing.

This was the experience of researcher Dr. Patrick Druckenmiller and his team at the University of Alaska, Fairbanks, who this week announced a newly identified species of dinosaur in spite of difficulty locating matching pairs of bones. The new dino is a hadrosaur, or duck-billed dinosaur, that once roamed the North Slope of Alaska and is now known to modern science as the Ugrunaaluk kuukpikensis  (Published in: Acta Paleontologica Polonica.) 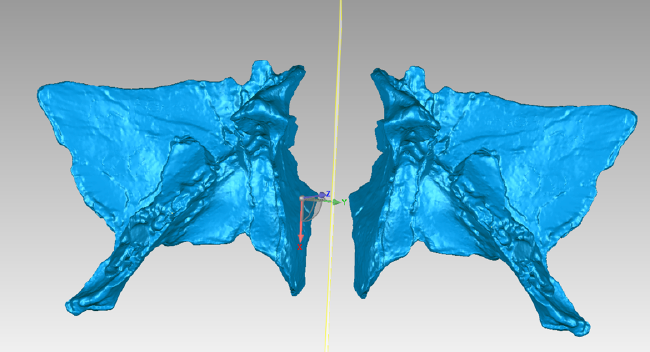 Dr. Druckenmiller and his team found fossils of the new species in the aptly named Liscomb Bonebed. Though they uncovered sufficient bones to confidently declare a new species, they faced a barrier in displaying the body of their findings due to a low rate of matching pairs. When Michael Holland and Ian Sayers heard about this situation, however, a solution was right around the corner. An expert in natural history and specialist in 3d scanning and printing, respectively, Holland and Sayers connected the researchers with 3D Systems’ digital thread technologies to 3D scan and print companion bones for the unmatched fossils.

“We could have estimated or been creative about what the skull looked like, but we would have had serious asymmetry and distortion if we did,” said Holland. “The scientific approach was to take complete fossils in a 3D scan and be able to mirror and accurately replicate them. We could only do that with 3D scanning and 3D printing.”

Using plaster casts of the selected bones rather than the fossils themselves, Sayers and Holland began scanning using the Geomagic Capture 3D scanner. According to Sayers, it took a few minutes to scan each fossil and less than 5 minutes to create a fully working 3D model of each bone. Using Geomagic Wrap, the team created accurate 3D data and mirrored it to make the matching bones.

Within one day, the STL data of the mirrored replicas was prepared and ready to print on the ProJet 660 full color 3D printer. “The ProJet 660 produces hardened gypsum parts, and this is an ideal surface to paint on,” said Holland. “We usually use the full-color features of these printers but this time we went for monochrome prints so we could add realistic finishes. The ProJet 660 parts are rigid and bone-like and also work well with the glue, pins and nails that we use for constructing skeletons.”

Using both the matched plaster cast and 3D printed bone parts, Holland went to work immediately in building the entire skeleton. With some nails, a bit of wire, some paint and an awful lot of skill, the team constructed the full skeleton in record time. 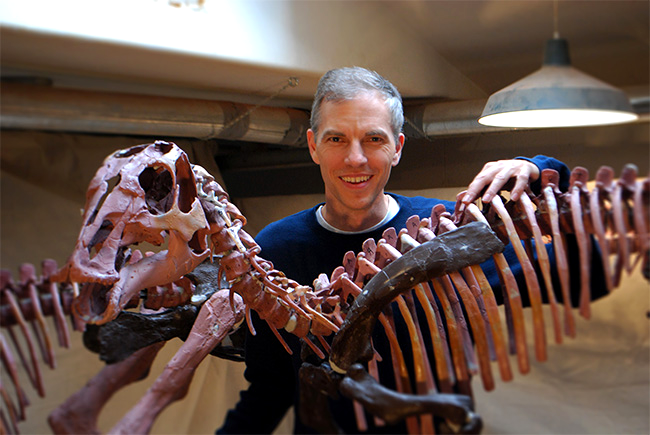 In fact, Holland was under pressure to create 3 full skeletons for the exhibit. “3D scanning and printing created huge time savings,” he said. “I had 3D data virtually overnight and 3D prints within a day or two.”

Said Druckenmiller, “This is a very cool and real example of how 3D digital scanning and printing are revolutionizing what we do in our profession. Not just for display, but for research overall. As a result, we are able to reconstruct a new species of dinosaur for the exhibit – faster than we ever could before.”