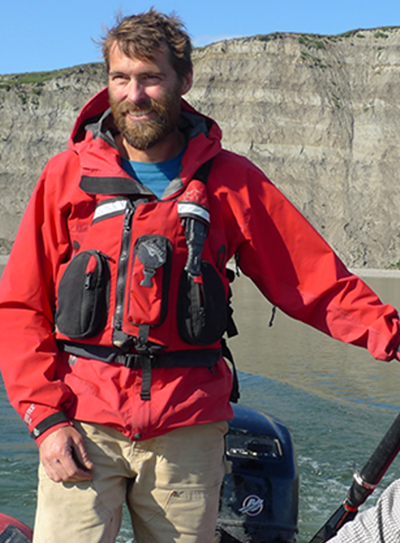 “This is a very cool and real example of how 3D digital scanning and printing is revolutionizing what we do in our profession – not just for display but for research overall. As a result, we are able to reconstruct a new species of dinosaur for the exhibit – faster than we ever could before.”

Knee-deep in Alaska’s Liscomb Bonebed, the single richest bed for dinosaur bones in either polar region, Dr. Pat Druckenmiller can safely declare he loves his job. Museum curator of Earth Science and Associate Professor of Geology at the University of Alaska Fairbanks, Druckenmiller has spent months every year during his 8-year tenure wading, sifting and sorting through the bonebed’s 3-foot layer of dinosaur fossils. His relentless work has advanced our collective understanding of the prehistoric creatures that once roamed the earth, and has even resulted in the identification of a new species of dinosaur that was just announced by the University:- Ugrunaaluk (pronounced oo-GREW-na-luck) kuukpikensis (pronounced KOOK-pik-en-sis). This news has been published in: Acta Paleontologica Polonica.

The complexity involved in sorting and categorizing specimens from the site, however, presents an enormous stumbling block for researchers, according to Druckenmiller.

“There are thousands of bones in the Liscomb Bonebed, here on the North Slope,” he says. “Most seem to be from the same species but many of the bones are mixed up and disarticulated, which means getting an exact matching left and right bone, for a leg or the skull, is virtually impossible.”

Faced with the challenge of assembling a dinosaur skull, Druckenmiller turned to Michael Holland, principal at Michael Holland Productions in Bozeman MT, which specializes in creating and building natural history exhibit features. For many years, Michael has used the digital thread that comprises 3D scanning to 3D printing to create accurate exhibits for museums and he saw instantly the potential to take a similar approach with this project. Holland also enlisted the help of Ian Sayers from Peak Solutions, a 3D scanning and printing service bureau and reseller in Portland, OR.

“We could have estimated or been creative about what the skull looked like, but we would have had serious asymmetry and distortion if we did,” said Holland. “The scientific approach was to take complete fossils in a 3D scan and be able to mirror and accurately replicate them. We could only do that with 3D scanning and 3D printing.”

Using plaster casts of the selected bones, rather than the fossils themselves, Sayers and Holland began scanning. Sayers used the Geomagic Capture 3D scanner for the work.

“We use the Geomagic Capture a lot, and this system just sits and works – capturing even the finest details of the fossils,” said Sayers. “In a project like this, when a surface texture is critical, this a perfect solution.”

Sayers said it took a few minutes to scan each fossil and less than 5 minutes to create a fully working 3D model of each bone. Using Geomagic Wrap, the team created accurate 3D data and then quickly mirrored it to make the matching bones.

“Geomagic Wrap is just great!” said Sayers. “It has the best set of tools and the interface is easy. The software just works and creates the STL files pretty much at the push of a button.”

Within one day, the STL data of the mirrored replicas was prepared and ready to print on the ProJet 660 full color 3D printer.

“The ProJet 660 produces hardened gypsum parts and this is an ideal surface to paint on,” said Holland. “We usually use the full-color features of these printers but this time we went for monochrome prints so we could add realistic finishes. The ProJet 660 parts are rigid and bone-like and also work well with the glue, pins and nails that we use for constructing skeletons, so it was a perfect choice.”

Continued Holland, “I was also under pressure to create 3 full skeletons for the exhibit in a short time, and 3D scanning and printing created huge time savings – I had 3D data virtually overnight and 3D prints within a day or two.”

Using both the matched plaster cast and 3D printed bone parts, Holland went to work immediately in building the entire skeleton. With some nails, a bit of wire, some paint and an awful lot of skill, the team constructed the full skeleton in record time.

Said Druckenmiller, “This is a very cool and real example of how 3D digital scanning and printing is revolutionizing what we do in our profession – not just for display but for research overall. As a result, we are able to reconstruct a new species of dinosaur for the exhibit – faster than we ever could before.”

Geosciences and Libraries Turn to Geomagic In Wake Of Disaster

Get a Free Trial of Geomagic Wrap 3D scan software