Mass Customization Measured By The Foot at Wiivv

When Shamil Hargovan, co-founder and CEO of Wiivv Wearables Inc., talks about locally made footwear crafted for the individual customer in a shop containing little or no inventory, he is not sinking into nostalgia or describing a hipster store in Brooklyn – he is describing his business plan.

Wiivv is at the forefront of mass customization, a long-sought methodology for delivering highly personalized products at costs similar to mass manufacturing.

Wiivv enables customers to use a smart phone app to take pictures of their feet, generating up to 200 data points. The company then uses proprietary and commercial image processing techniques to prepare data for 3D printing of individualized athletic shoe insoles. As of early 2017, Wiivv is producing tens of thousands of customized insoles a year.

The latest innovation from Wiivv is a custom-fitted sandal with individualized arch supports produced by a 3D Systems sPro™ 60 SLS printer. The arch support is integrated into a conventionally manufactured foot bed, which is made using proprietary, 100-percent recyclable foam.

Wiivv was founded in the summer of 2014 by Louis-Victor Jadavji and Shamil Hargovan. The company is headquartered in Vancouver, Canada, with an R&D and manufacturing facility in San Diego, California.

"We thought the orthotics market was wrought with opportunity for disruption," says Hargovan. "We gave ourselves a difficult design challenge: collecting high-quality data from the ubiquitous smart phone to make an individualized product that would have an impact on people's lives."

From the beginning, the company was built on three central tenets: mass customization, localized production, and little or no inventory. Speed is a mandate. Instead of the turnaround of a month or longer for most customized footwear, Wiivv delivers its product within five days of receiving a customer's smart phone photos in the United States.

"In today's world when we are talking about a custom product, it needs to be local, somewhere where you can get it to the customer in a timely manner," says Hargovan.

3D Systems has proven to be an ideal partner for Wiivv, supporting the company when others were hesitant to take on the risk of doing business with a small start-up.

"3D Systems was the only 3D printing company willing to work with us when we were really small," says Hargovan. "They've given us great service from the beginning. They came in willing to train us and get us up to speed and running. They had the product we needed in the sPro 60. We examined at least 20 different product options and the sPro 60 was the right product for our use case, with the right yield and service model for us."

While the smart phone app is the gateway to Wiivv’s mass customization process, allowing customers to capture individualized data easily and conveniently, the sPro 60 printer provides the means for efficiently converting digital models into final products.

"3D printing has allowed us to remove most of the limitations of traditional manufacturing methods and focus solely on how we should best solve the problem at hand and design exactly for that solution," says Michael Salmon, design lead for Wiivv. "It allows us to be 100-percent custom with our insoles. Otherwise we would have to cut individual tools, get castings of each foot for heat molding, and use many other expensive or time-consuming processes."

"3D printing has four main advantages," says Chris Bellamy, senior product and manufacturing engineer for Wiivv. "One, there is no tooling investment; two, it enables mass customization; three, it gives us design freedom; and four, it provides fast turnaround."

The sPro 60 SLS system is known for its high throughput of medium-sized parts (up to 330 mm long) in the broadest range of DuraForm®-engineered plastic, composite and elastomer materials. The large 15 x 13 x 18 inch (381 x 330 x 460 mm) build envelope provides the flexibility to stack parts in a wide variety of configurations.

"The build volume, material options and precision of the printer are critical factors for us," says Salmon. "Having a large build volume allows us to maximize the number of insoles per print. The more we can pack into a 24-hour print cycle, the more cost effective it becomes. The massive amounts of SLS materials allow us to find the right option for each application, while having the ability to be agile and switch materials within a few hours."

Wiivv continues to become more productive with its 3D printing on the sPro 60, optimizing material performance with custom blends, increasing the number of parts in each build, and improving machine efficiency.

"We have increased the number of components we can fit in a build by 75 percent," says Bellamy. "We have also doubled our efficiency by reducing the cooling time and increasing build speed, allowing us to scale up for ever-greater volumes in the coming weeks and months."

Hargovan is confident that by continuing to find new efficiencies in the 3D printing process Wiivv can scale up from tens of thousands of units to hundreds of thousands within a year.

The Wiivv Custom-Fit Sandal should benefit from the market success of Wiivv's custom-fit insoles, which the company says broke a record in February 2016 as the most-funded 3D printed product on Kickstarter. The insoles have scored high in customer satisfaction, with a return rate of less than one percent. More than a third of Wiivv insole customers own more than one pair.

The main production challenge for the sandal is efficiently integrating the 3D printing process for the individualized arch supports with the other elements produced using more traditional means. The straps and toe thongs are produced with traditional injection-molded techniques, but are still customizable. The straps can be adjusted and replaced, and the toe thongs are assigned to one of three positions based on the customer's smart phone photos.

"The supply chains for these two production models are so fundamentally different," says Hargovan. "With 3D printing, we buy powder, run a machine and it's this incredible inventory-free, cache-free business model. On the flip side is the inventory-type model that's prevalent in footwear and apparel today. With that model, you have to plan in advance for the sizes and the number of pieces you're going to need to be pre-made for customers."

The ability of 3D printing to continue delivering greater efficiency at lower costs is central to Wiivv's continued growth. The company's plans extend beyond footwear to almost every conceivable type of body-fitted apparel.

"The Wiivv Custom-Fit Sandal is our next step towards ultimately creating 3D printed gear for every body part," says Hargovan, who calls his company's strategy, "Body Perfect Gear."

Hargovan is confident that Wiivv is starting out with the right products to fulfill the promise of mass customization using sPro 60 machines.

"The industrial world has spent a long time looking for a use case for mass production on 3D printers," he says. "We've come up with a product that has proven its case based on customer demand."

What comes next is largely predicated on continued advances in 3D printing combined with the fertile minds of Wiivv's strategic management, design and production teams. 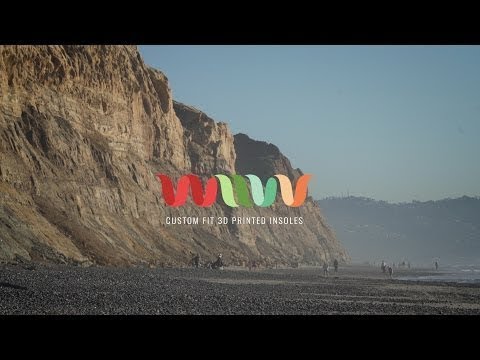