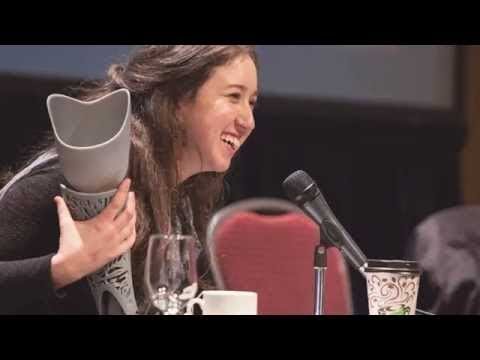 In November 2013, Natasha Hope-Simpson lost her left leg in a hit-and-run accident. As you might expect, she had to put her whole life on hold. At the same time, Natasha proved stronger than she had ever imagined. Natasha moved forward with her life through design. After reflection on the prosthetic leg she had been given, she knew it had to be different. As a graduate of the Nova Scotia College of Art and Design (NSCAD), she sought to make a leg that was more personal, one that fit her personality and her anatomy.

She wanted a leg that was human.

It all began in February 2014, when Natasha spoke to a class at which NSCAD Director Gregor Ash happened to be visiting. Natasha discussed her prosthetic design efforts and the challenges of creating this functional, aesthetic personal medical device.

Inspired by Natasha’s drive and ambition, Ash came to us at Thinking Robot Studios with a challenge: to team with Natasha to create a prosthetic design in time for NSCAD’s Maker Symposium within 15 days. We make a living by creating custom orthopedic implants and systems, but I remember thinking that this was going to be a challenge. How on earth were we going to pull this off?

We knew that 3D printing and scanning was the only way to do this quickly and accurately, so we immediately called Mike Fanning, CEO of NovaCad, a 3D Systems reseller. For scanning, we called Ian Weir at Canada’s Department of National Defense and Bob Garrish of Spring Loaded technology. Natasha’s team of one had, within less than a day, become a team of six. But there was still a lot to do.

In order to get the shape and size of Natasha’s prosthetic leg correct, Ian and Bob took two different scans of Natasha’s existing leg using laser and white light scanning. They processed the scans using Geomagic® Wrap scanning software and converted the data into usable 3D so my business partner, Jourdan Dakov, and I could perform the engineering steps. Using the mesh scan data, we created the prosthetic‘s mechanical and structural components in CAD.

In the meantime, Natasha was trying to work out the aesthetic side of the prosthetic leg. She wanted something as attractive as it was functional, and she had many ideas but little time to develop them. The breakthrough came when she discovered the 3D printed masks of Melissa Ng on the Internet.

“Melissa’s designs were amazing,” said Natasha. “They were perfect. I instantly fell in love.”

So I quickly contacted Melissa in New York City, and just like the rest of us, she was eager to help. “I was deeply moved by her story and was happy to donate my design to the project. I will continue collaborating with Thinking Robot over the next year as they develop a final prosthetic for Natasha,” said Melissa.

Melissa extracted her design data into a usable format and immediately sent it over. At this point, we had three days to apply the design to the mechanical parts before 3D printing was to begin. To say the least, this process was intense. We were adjusting mechanical CAD data and applying the design elements from Melissa. We knew from Mike Fanning and the 3D Systems team in Boston that we only had a few days to get them a printable file.
Yet seven days after starting the project, and after some long days and nights by our team members, we had a prototype design ready to be 3D printed. We rushed the CAD files to NovaCad.

“I immediately sent the files to the 3D Systems team in Andover, Mass., and specified the materials to be used,” said Mike. “The team there pulled out all the stops to print the components and get it shipped back to us.” The 3D Systems team printed on the ProJet 7000, a robust SLA printer that delivers highly accurate 3D parts with excellent surface smoothness."

To read the entire story, select the PDF Here

Get a Quote for Your Own ProJet SLA 7000 3D printer