"If we used a traditional method for a wax injection tool, it could take up to 5 weeks and cost well in excess of $20,000. However, if we rapid prototype an axial turbine blisk, for example, with our 3D Systems printer, the wax investment piece builds unattended overnight and is ready for foundry in the morning for well under $2,000."

Making test parts using traditional mold manufacturing techniques is risky business. Take turbine engine components, which traditionally require weeks and tens of thousands of dollars to finish. The designs upon which these parts are based go through extensive cycle analysis, computational fluid dynamics, finite element analysis and solid modeling, but there’s always the chance that alterations may be required due to a mistake or change in specifications. In any case, if a design change is suddenly required, your shiny new test part is now an expensive, time-eating piece of scrap.

In addition, with traditional techniques iterative design and testing become virtually impossible. Turbine blades especially may require several tests, as they have to be twisted precisely. Even a few degrees off and they won’t function. But when one part costs upwards of $20,000, it’s not feasible to produce several parts for testing alone.

Standout turbine engine makers are finding ways to make changes and maximize iterative design by producing parts quickly, accurately and at a low cost. Wisconsin-based Turbine Technologies and its gas turbine development sister company, Kutrieb Research, get it right by using 3D Systems ProJetR MJP Wax 3D printing technology to produce multiple wax patterns, which they then cast in super alloys and test until they find the right design. 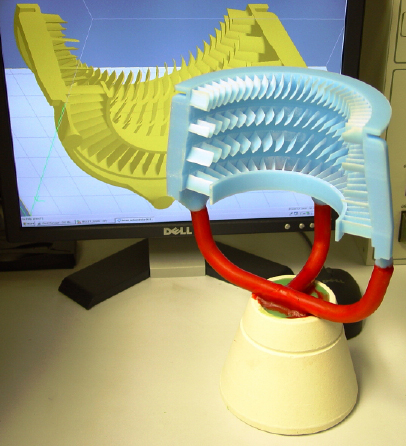 “All the engineering and FEA software in the world can’t replace actually having physical test models,” says Toby Kutrieb, the company’s vice president. For a company that considers physical testing its linchpin, the ProJet wax patterns are a huge boost to creating an R&D process that doesn’t rely on expensive tooling. (Image above: A wax pattern of a stator case with sprues attached)

For over 25 years family-owned Turbine Technologies has been the go-to provider of educational laboratory turbine equipment for college engineering departments and technical colleges. Kutrieb Research, Turbine Technologies’ spin-off company, makes small, advanced turbine engines for vehicles including UAVs. To date, Kutrieb Research has successfully completed contracts for the likes of NASA, the United States Naval Research Laboratory, the US Air Force, and the US Army. You could say that founder Wolfgang Kutrieb and his three sons know their turbines.

Early on, they knew investment casting would play a huge role in their success, both for testing and production. In the company’s infancy, CNC wasn’t advanced enough and tooling was expensive (and it still is). So Wolfgang Kutrieb bought an induction vacuum furnace, one of the few in the world, in which they could cast high-nickel superalloys for their turbine engines. In those days, they carved casting patterns by hand, a painstaking and long process.

Turbine Technologies’ foray into 3D printing actually started in the late 90s when they bought a 3D Systems Viper SLA 3D printer. A decade later, 3D Systems Sales Manager Jim Dier proposed a new printer, a ProJet MJP 3D Wax printer, and ran a few sample wax casting patterns for them. The ProJet MJP quickly prints mirror standard casting patterns with an exceptional level of accuracy. Wax parts produced on the ProJet are castable in a variety of casting processes, from those used by Turbine Technologies to jewelry and medical device applications.

“The casting patterns were great,” says Toby Kutrieb. “Jim gave us samples, we did shell building and burnouts, and we were impressed. We bought one of the first models that was made.”

They put the ProJet to use right away. “We ran the machine a lot,” Toby Kutrieb says. Primarily they used it in product development, i.e., for that vital role in iterative design and research. But after a while, it started to make more sense to use the ProJet for small production runs, printing casting patterns for specific turbine parts and some customization work. “Right now,” continues Toby Kutrieb, “we’re doing R&D on the machine about 20 percent of the time. The other 80 percent is production.”

Creating a wax pattern traditionally starts with milling an injection mold, which is a negative cavity of the part. Then workers inject wax into the mold to produce the pattern. From there they surround the pattern in ceramic, burn out the wax and go through a vacuum investment casting process in which molten super alloy is poured into the ceramic shell. ProJet casting patterns allow Turbine Technologies to produce a wax pattern in hours without making an injection mold, without wax injection and without cooling time.

“If we used a traditional method for a wax injection tool,” says Toby Kutrieb, “it could take up to 5 weeks and cost well in excess of $20,000. However, if we rapid prototype an axial turbine blisk, for example, with our 3D Systems printer, the was investment piece builds unattended overnight and is ready for foundry in the morning for well under $2,000.”

Whether it’s for R&D or production, the ProJet allows them to make better more accurate components and test designs more freely. They simply print several different options of a given part and find out which one produces better results. This higher level of quality means more opportunities and an even stronger reputation for Turbine Technologies, Kutrieb Research and the family behind the two companies.

“Additionally,” Toby Kutrieb stresses, “with the digital workflow that the ProJet allows, we can keep our designs safe. Tooling can be damaged. You have to train people how to handle it. It can be lost in a fire. It has to be protected. You lose a tool, you’re wasting months getting back to production. But with electronic files, if something were to happen, we can be up and running again in a matter of days.”

The ProJet is also allowing the company to branch out in terms of offerings and product variation. One of its educational pump labs allows engineering students to learn about impellers by designing their own. Turbine Technologies then uses the ProJet to produce each student’s design. “They design the impeller, mathematically figure out what it will do. Then they send us a design file, we print it, cast it and the student can see how close their predictions were,” says Toby Kutrieb. It’s extra offerings like these that bolster the Turbine Technologies brand and enhance the educational experience for students all over the world.

Today, many of the internal parts of the turbines produced by Turbine Technologies and Kutrieb Research are first 3D printed on the ProJet. They’re even doing some service work on the side for area companies that don’t have the same casting and rapid prototyping technologies. Through it all, with the help of their streamlined workflow, the Kutrieb family companies have bolstered their standing as trusted turbine developers and manufacturers, and they’ve charted further into the future with bold new designs for the larger engine market.