Ormco, based in Glendora, CA, plans to put orthodontic treatment on the fast track when its Insignia line of custom-designed devices complete clinical testing. To get the project off the drawing board, the company contracted with Geomagic to implement rapid 3D reverse engineering with Geometric Software Solutions for specialized design and manufacturing tools.

Speed, Comfort and a Nice Smile

Traditionally, fitting a patient with orthodontic appliances, or braces, has not been an exact science. Like shoes, braces are designed for a statistically average person, although few orthodontic patients can be described as “average.” The orthodontist must also position the braces using only hand-eye coordination, and then make adjustments based on experience and initial results—a process that can take up to two years, sometimes more.

Ormco's process will not only provide orthodontic devices that are fitted exactly to the patient's teeth, it will get results much faster and enable orthodontists to visualize treatment. Such up-front visualization is key to guaranteeing a smooth course of treatment because changes don't need to be made down the road. Patients will be more comfortable, spend less time in the orthodontist's chair, and get a smile tailored to the shape of their jaw and face. While the technology benefits all patients, it is most effective for the simplest and most complex cases.

“A simple case using traditional appliances should only take about three months, but it's not going to be that fast,” says Craig Andreiko, director of advanced projects at Ormco. “The combination of the mismatch of the average-based design of the product and the hand-eye error of the orthodontist would initially make the case look worse than it did, to begin with, and the orthodontist will need maybe six months to move the teeth back to where they started.”

With complicated cases, such as those involving surgery or people with crowns, bridges and other major dental work, treatment times with traditional braces can take up to two and half years or more.

“On the simplest cases, we can now cut the treatment time way down because we only affect the teeth that need to move,” says Andreiko. “With complex cases, the computer creates a road map for the orthodontist to follow, and the appliances fit the patient according to the map. There is no guesswork.”

Andreiko says the idea of custom-designed orthodontics is not new. In fact, Ormco had written software to engineer custom appliances in the past, but the company wasn't up to the task and the effort was only partially successful.

“We tested a CAD solution using CATIA, but found that it required too many workarounds,” says Andreiko. “We weren't able to do full-on 3D modeling until recently when advances in software and computing power made the technology practical.”

After seeing a demo of Geomagic Wrap software, testing it on some native files, and meeting with the company's principal, Andreiko signed on to have Geomagic customize a digital dentistry application for Ormco. Geometric Software Solutions was engaged as well for its customized CAD/CAM software.

The Mechanics of Straight Teeth

The black form is placed on a CGI CSS-1000 scanner, which alternately cuts and scans it into ultra-thin layers, much like a 3D photocopier. At some point, the white cast begins to show through, and the cut-and-scan procedure continues until the entire mold is destroyed.

“The scanner takes the data and makes a sort of topographical map of the patient's teeth, from which it creates a point cloud,” says Andreiko. “A typical cloud is between 800,000 and 1 million points. That's the entry point into our customized Geomagic software, called Anatomy.”

Anatomy arranges, filters and smoothes the point cloud data. Then it wraps or surfaces the point cloud to create a solid model and examines that model to determine its shape. The software saves the curve that describes the size and shape of the skeletal structure and then "isolates" each tooth. That is, it reconstructs the data the scanner may not have acquired because the interproximal area, or gap, between two teeth may be quite small, and the teeth occlude one another.

For successful treatment, it is essential to isolate the teeth and compute how much they can move before they start touching other teeth. 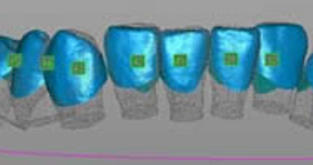 Once each tooth is isolated and Anatomy determines its orientation, the software identifies and applies well-known dental landmarks—areas where, in a perfect smile, the upper and lower teeth touch each other, as well as other important areas.

“One advantage to using Anatomy is that we have repeatability,” says Andreiko. “If a lab person were to apply landmarks, he or she would apply them differently every time, even on the same patient.”

Anatomy then attaches computerized roots to the teeth, sealing off the open base of the scan. For each tooth there is a specific root model, one for each front incisor, bicuspid, molar and so on. Upper and lower jaw roots differ as well, for a total of 28 root models. With the addition of a root, each tooth becomes a solid object or watertight model that can be manipulated to achieve its optimum position for each patient.

Anatomy saves this information in a proprietary file format that is exported to Geometric Software Solutions' Design software.

Using Design, Ormco creates a lower arch based on the skeletal information and 3D models of the patient's teeth, followed by an upper arch to fit its lower counterpart.

“At this point there's human intervention,” says Andreiko. “Our case design operators—certified dental technicians who work with the patient's practitioner to create the tailor-made solution—make minor adjustments manually because the structure of the human mouth makes it difficult to model to perfection mathematically.”

Design then builds the occlusions, or the relationship and alignment of the upper and lower teeth, and generates the code that drives the machinery to manufacture the custom appliances.

Putting the pieces together

There are three parts to the Insignia system: jigs, brackets and wires. Jigs are made from digital impressions of the patient's teeth and act as mini stencils or roadmaps for precisely positioning the brackets, which attach to the teeth and receive the wires.

“The only thing that matters about the bracket is its slot,” says Andreiko. “It's specifically made to receive a customized wire that moves the patients' teeth to the middle of the jaw bone, based on the skeletal information from Anatomy. Each patient's jaw is shaped and sized differently, so wires are shaped and sized to match each patient.”

Like traditional orthodontic appliances, Insignia's spring-type wires begin moving the teeth. As the teeth get straighter, the wires don't pull with their original force and must be switched out for wires with a heavier cross section that will continue moving the teeth toward the desired result.