Zack Petroc takes Geomagic Freeform to the World Of Tomorrow

As a Model Supervisor and Senior Illustrator for a California-based movie production company, Zack's skills - along with Geomagic FreeForm - are helping to create "World of Tomorrow," a feature film set in 1939 that is a mix of action-adventure and science-fiction. The movie, starring Jude Law, Gwyneth Paltrow, and Angelina Jolie, will be released in theaters during the fall of 2004. What is unique about "World of Tomorrow" is that it is being shot entirely on blue screen, which means backgrounds behind the actors are filled in digitally after principal photography. The primary responsibility of Zack and his team is filling those backgrounds with visual effects created through digital modeling for the movie

At World of Tomorrow (which is the name of the company as well as the movie), the visual effects modeling process begins with the creation of digital replicas of the main actors and actresses featured in the movie. First, companies such as California-based Gentle Giant, are called in to create digital scans of the actors. Gentle Giant then sends the resulting scan data to Zack and his team as .cly files. The scan data is imported into FreeForm  where they digitally re-create missing data, alter facial expressions if needed, and restore the scan to a surface-able quality.

Zack says, "Using FreeForm allows us to quickly and easily add a very high-level of detail to the digital scan data of the actors and actresses."

(Above) Zack creates all the organically shaped "props" such as this lagoon tree.

After the digital modeling is completed, the scans are surfaced directly in FreeForm and exported into an animation program for setup and preparation. The digital doubles of the actors and actresses are then added to various scenes in places where it would not be possible to use the actual performers.

Zack and his team also create all the organically shaped "props" for the movie using FreeForm. Props that were digitally modeled for "World of Tomorrow" include: creatures, classical statues, set props, landscape, terrain, mountains, rocks, and trees. The process of producing props begins with a sketch that is generated by hand. From the design sketches, Zack and his team use FreeForm to quickly generate preliminary conceptual models. The models produced are presented to the Director and Production Designer for digital reviews and approval. All design changes during the reviews are executed using FreeForm until the final design is reached. After the digital models are finalized, a physical model is produced using rapid prototyping

In addition to the props, Zack and his team are using FreeForm to create some of the secondary characters from scratch.

Zack says, "Geomagic FreeForm allows us to utilize fully-digital techniques from concept to final design, offering us the most intuitive option for creating content and characters. As a digital modeling tool FreeForm never limits our creativity."

Zack received a Bachelor's degree in Fine Arts, with a major in sculpture and a dual minor in drawing and digital media, from The Cleveland Institute of Art. After he graduated, Zack spent two years sculpting concept cars. He then transitioned into teaching college-level digital design. Zack also ran a small business that allowed him to focus his efforts on sculpting digital characters for broadcast animations and the entertainment industry. He was fortunate enough to spend a year in Italy studying figure sculpture.

(Images below) Aside from working at World of Tomorrow, Zack Petroc spent many years sculpting digital characters. These images are pieces created as character designs for narratives that he developed. 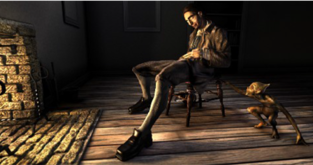 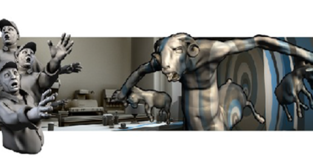 Get a Free Trial of Geomagic Freeform Software