It started with a savage act, but thanks to animal welfare advocates, a group of dedicated specialists, and leading-edge 3D technologies, a young Costa Rican toucan has become a national symbol of perseverance and hope.

The toucan, named Grecia after the region in which it lives, was attacked by youths and lost almost the entire top part of its majestic beak. Fortunately, the injured bird was found and taken to nearby Zoo Ave, Central America’s largest animal rescue center, for care and recuperation.

How to scan a toucan

Grecia’s story got the attention of Grupo SG in San José, Costa Rica. As a distributor of 3D Systems products, Grupo SG was in a position to offer a complete chain of 3D solutions─from scanning to modeling to printing─to help the toucan’s return to health.

After giving time for the remaining part of the toucan’s top beak to harden, Grupo SG used an Artec Spider 3D scanner to capture dimensions and features from Grecia’s beak and surrounding areas. The toucan needed to be awake during the process.

“Scanning a live toucan without anesthesia was difficult,” says Esteban Murillo, Sales Representative for Grupo SG. “We made two or three different scans to make sure we had all the data we needed. The toucan stayed very still but the clock was ticking.”

Joo worked with two sets of data: One from the scanning of Grecia’s broken beak and the other from the whole beak of the dead toucan. His first step was designing a well-fitted beak for Grecia using Geomagic Freeform® software from 3D Systems.

Joo says the design work was done over a two-month period, but actual time he spent was fewer than a dozen hours for several versions of the beak and slight modifications.

“Time was saved because of the power of Geomagic Design X as a parametric modeler,” says Joo. “Commands in Design X are well-optimized for creating accurate and high-quality surfaces easily and quickly from scan data. It also allows us to do general CAD modeling for creative design work.”

Collaborative efforts for the prosthetic beak also included two 3D Systems materials experts in the United States -- Steve Hanna, Vice President of Global Materials Sales and Marketing in the greater Seattle area, and Khalil Moussa, a Senior Director of R&D for materials and processes in the Rock Hill, S.C., headquarters of 3D Systems.

Hanna and Moussa studied the characteristics of real toucan beaks and load factors provided by the experts in Costa Rica and made recommendations on printers and materials.
Grupo SG and Moussa experimented with CubePro Nylon material for the initial prototypes and settled on Duraform PA for the final version. Duraform PA, a robust nylon material, was chosen for its strength and durability qualities that match Grecia’s needs for preening, drinking and eating.

The 3D-printed cap and beak prosthesis were shipped to Costa Rica for Grecia’s operation. The cap was attached by epoxy glue to the remaining part of the toucan’s beak and the prosthesis was locked in place with a pinned hinge. The caretaking team chose not to paint the beak to serve as a reminder of Grecia’s tragedy and recovery.

Grecia adapted very quickly to the new prosthetic beak. Within days, he was preening himself and eating and drinking normally. He’s even singing better than before the prosthesis, according to sources at Zoo Ave.
For Grupo SG, the prosthetic beak is not just a major technology statement, but a source of national pride.

“The voice of the Costa Rican nation was raised loudly and clearly and we have the privilege of being part of this team that provided a second chance for life to this beautiful sentient being,” says Karley Fu. “A team of great humans and gifted professionals executed a never-seen-before act of love in collaboration with the latest 3D technologies.” 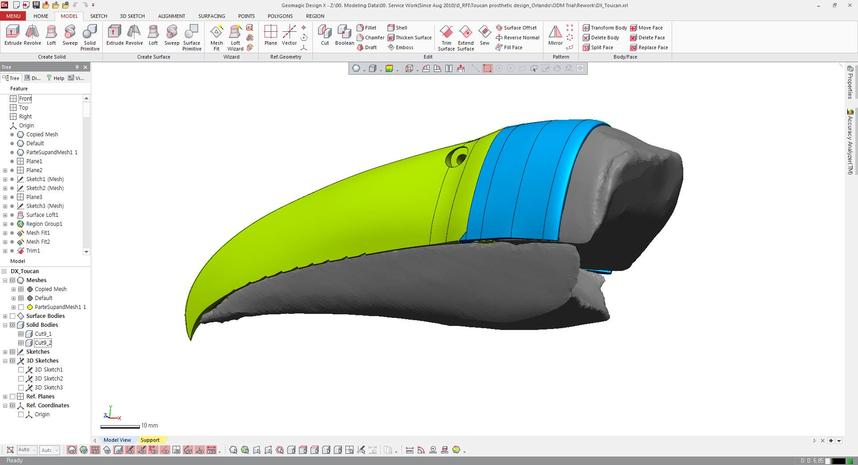 The design of the new prosthetic beak for Grecia the Toucan 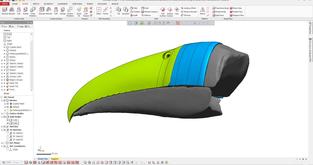 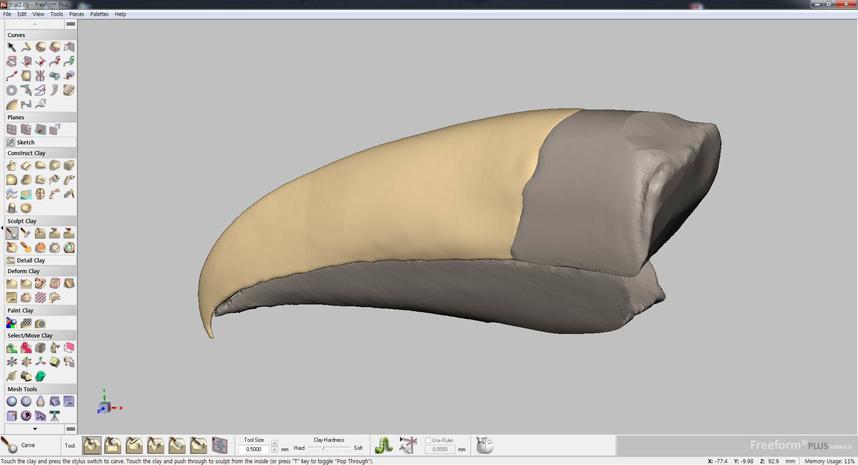 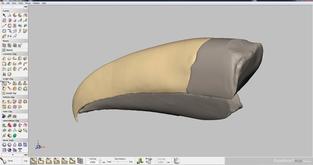 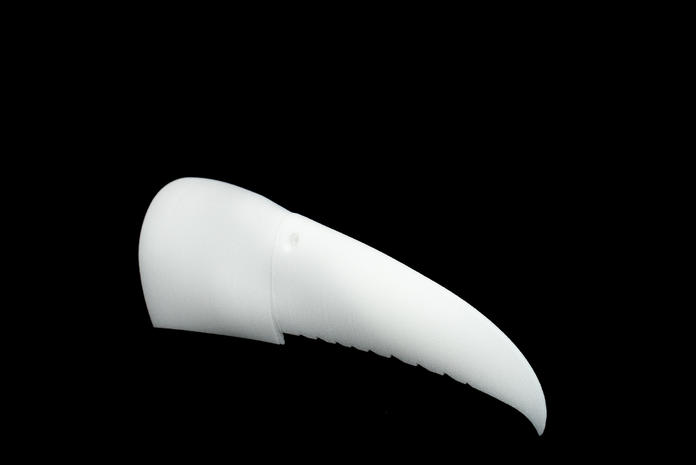 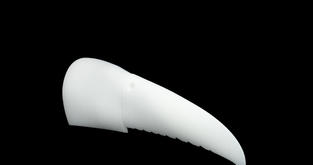 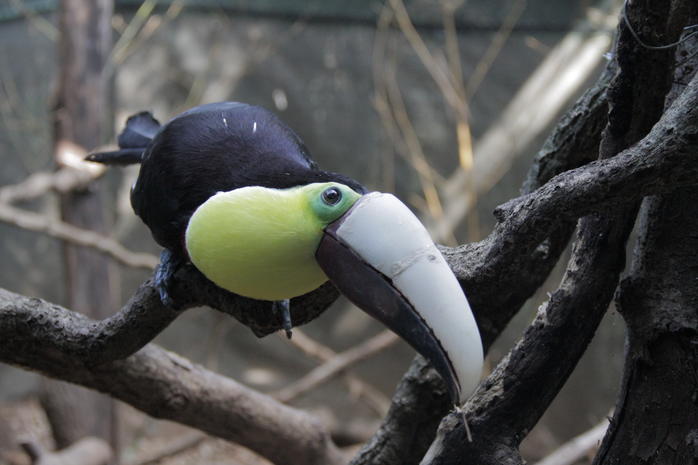 Grecia the Toucan enjoying life with her new prosthetic beak 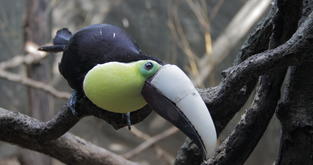 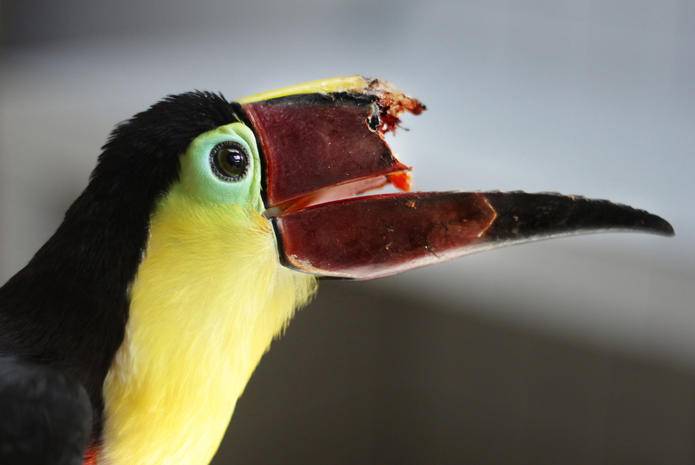 Original injury for Grecia the Toucan 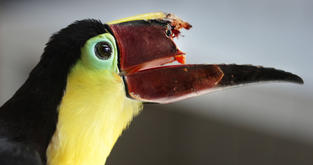 Geosciences and Libraries Turn to Geomagic In Wake Of Disaster

Get a Free Trial of Geomagic Design X Scanning Software.

Find out more at Oqton.com