"We’ve been able to produce parts off the SLS 3D printers from 3D Systems that I’d been told for years would not build in SLS. It is far exceeding what we thought it was capable of. The applications for it and the speed at which it produces parts are unprecedented." - Mike Littrell - President and Owner of C.ideas, Inc.

The prototyping service bureau C.ideas, Inc. has been known amongst its peers as a 3D printing expert for 3D Systems' SLA, MJM, and ProJet technologies, with full finishing services, throughout its fourteen years of operation. Yet as the company has grown and additive manufacturing initiatives have gained traction, C.ideas owner and president Mike Littrell decided to explore the possibilities of laser sintering (LS) production. He has discovered "an absolute game-changer."

Accustomed to the turnkey operation of FDM machines, Littrell wanted a Laser Sintering machine that anyone in his company could operate. His search led him to 3D Systems' SLS 3D industrial printer range which outstripped the competition with its easy front-end software.

Before owning its own system, C.ideas coordinated with other bureaus to fill its SLS production needs and was repeatedly confronted with barriers restricting what geometries were possible. Littrell tested those barriers with the first run of his new SLS printer and said, "This machine is incredible." He was astonished not only by the production versatility and speed of the printer but by the exceptional quality of the products. He immediately noticed that he was achieving an incredibly smooth surface finish that required very little post processing, and fine feature details that not only surpassed all his expectations but which he had been led to believe were not even possible in Laser Sintering.

Because Selective Laser Sintering production is quicker to build, and in many cases less expensive to run than FDM, Littrell says he easily sees his company becoming a split LS and FDM house, especially given the growing momentum of additive manufacturing. "The quality is so outstanding," Littrell says, "that I could not honestly find myself going into that process without this machine. A fully digital, high-definition, and a high-speed machine is, to me, absolutely the next logical direction for the process to attain stunning quality surfaces and fine feature details. I should have bought this machine three years ago." 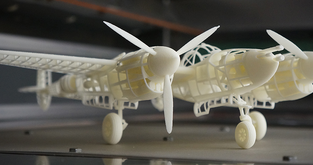 Get a Quote on a ProX SLS Printer