The contour lines on a two-dimensional topology map can say quite a bit about a geological or mining project, but they don’t tell the whole story. Now, MineBridge Software, Inc. has created a way to communicate the visual impact of mining operations with 3D printed topography models in natural-scale, meaning without vertical exaggeration.

“It’s not always apparent from looking at a drawing how mine waste facilities integrate with their surrounding environment,” says MineBridge’s Carlo Cooper. “By using 3D printed models, it’s easier for stakeholders to see the visual impact of these structures.” 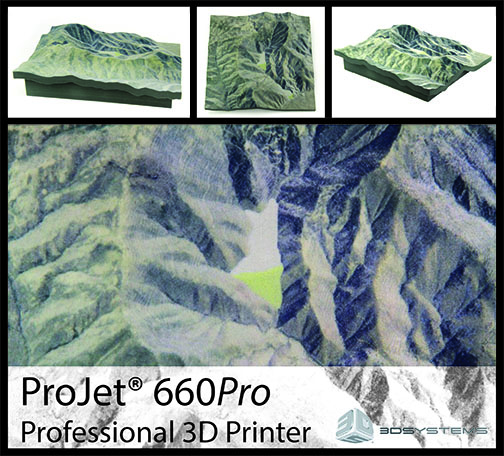 Canadian-based MineBridge Software’s new process creates 3D-printable topography maps by first creating surfaces from survey data using their flagship software package, Muck3D. For their inaugural model, they then used Muck3D to develop standard dam designs, which were colorized using geo-referenced aerial photographs. After adding a base and preparing the model, it was on to 3D printing at Whiteclouds, a 3D printing service provider in Ogden, Utah. Whiteclouds’ print—made on 3D Systems’ full-color ProJet® 660Pro—depicts an area in northern Nevada typical of terrain where mines are in operation. This particular model, with 512 layers, is 203mm x 198mm x 52mm, and does an exceptional job demonstrating the unique geological features of the area.

“The big benefit is the ease with which the 3D files and demo prints can be created,” said Cooper. “We’re using this particular model to show clients what we can do with their data. The ones we’ve printed so far have looked great and been very well received. We plan to do a lot more of them as time goes on.”