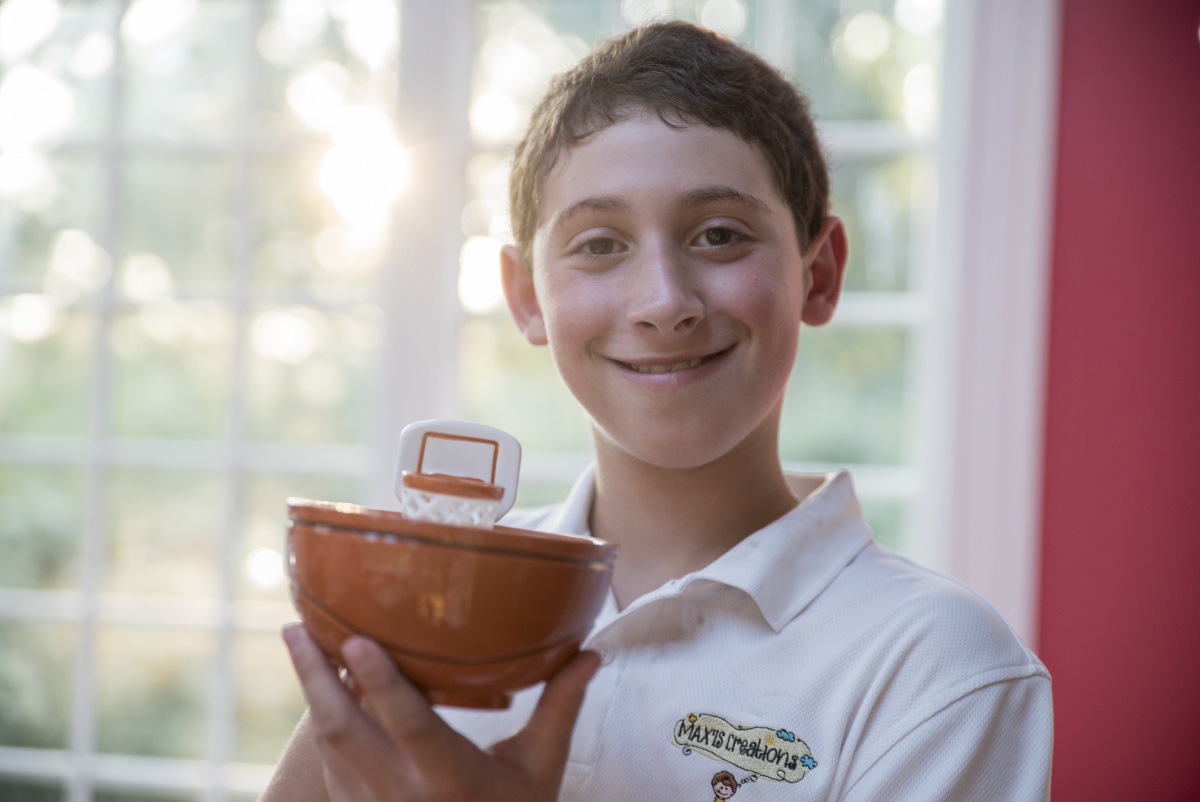 Most 8-year-olds have hobbies, but not all hobbies revolve around developing and running a business. As Founder and Chief Creator of MAX’IS Creations, Inc., suffice it to say Max Ash is not your average 8-year-old. A remarkable point to keep in mind is that Max struggles with dyslexia, a learning disability that can affect a person’s ability to read, write, and process language. Though many people with dyslexia find ways to cope as they grow older, it can be particularly frustrating for children as they try to keep up with their peers in the classroom. Despite the challenges dyslexia creates for traditional learning, it is also frequently associated with creative thinking, and Max is full of creative ideas.

Max’s feature idea all started in his 2nd grade art class when he was instructed to make a mug out of clay. While his classmates diligently shaped their pieces in the expected pattern, Max took a fun turn by adding a miniature basketball hoop to the mug’s bowl so he could score points landing marshmallows in his hot chocolate. Recognizing the potential of The Mug With A Hoop™, Max and his parents contacted Sean O’Reilly at 3D Printsmith to design a prototype using 3D printing technology. “I knew [it] was a good idea when my friends copied me,” said Max, now 11, who received a patent for his design this past spring.

Using his 3D printed prototype, Max was able to share his idea at the Product Pitch at Fenway contest in Boston, where he became the only child named among the ten finalists. Following the competition, Max founded a crowdfunding campaign to raise production money and expanded his line to include The Mug With A Glove™, The Mug With A Goalpost™, The Soccer Mug With A Goal™ and The Hockey Mug With A Net™. After having each of his mugs 3D printed and tweaking and modifying designs, Max used his 3D prints to create molds for US manufacturing. Following a successful year one, Max launched overseas production to meet demand and stood back to watch his mugs fly off the shelves at retailers like UncommonGoods, The Grommet, Nordstrom, Learning Express and even the Basketball Hall of Fame.

As his business continues to expand, Max remains committed to supporting kids like him and contributes 5% his profits to charities and non-profits that educate the public about dyslexia and empower dyslexic children to unlock their true potential. To learn more about MAX’IS Creations, check out www.maxiscreations.com, and watch the video below to learn how Max communicated and brought his idea to life using 3D printing.